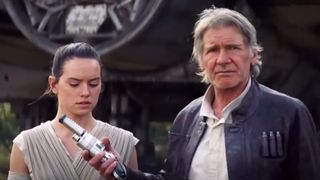 Yet another teaser for Star Wars: The Force Awakens has appeared, revealing more footage from the upcoming movie. A lot of it we've seen before, but a few new clips in particular have got us excited.

There's a new shot of Han Solo, Leia and C-3PO (complete with red arm) stood around a table with someone who looks very much like Admiral Ackbar.

We also see Han give Rey a blaster, before showing up again later in the video in a scene where he's shooting some baddies himself. It's the first time we've seen Han open fire since Return of the Jedi 32 years ago.

Check out the whole clip below.