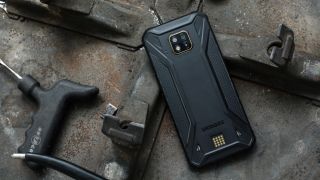 Motorola's Moto Mods turned heads when they were released in 2017, with the modular accessoriesgreatly adding to the versatility of the Moto Z2 Play. Now, a challenger brand, Doogee, wants to do the same thing with its new flagship model, the S95 Pro.

While its rival Blackview focuses on one single unique selling point, a FLIR IR camera, in its latest product, the heat-seeking BV9800 Pro, Doogee opted for expansion capabilities.

You can add a battery module or a speaker module; the latter has two 27mm speakers and an integrated battery. The battery module has a 3500mAh that tacks on the 5150mAh already present in the phone, delivering a whopping 8650mAh capacity, which can be wirelessly charged.

Doogee has suggested that more modules may come soon depending on demand; including the possibility of special camera modules or walkie-talkie style additions, all of which will magnetically attach to the phone.

The rest of the hardware isn't bad at all; there’s a Mediatek P90 CPU with 8GB RAM with 128GB onboard storage, a 48-megapixel Sony IMX582 camera, NFC, Android 9.0 and a camera with 10x optical zoom.