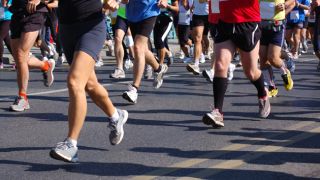 So, we’re already at day two in the 10 day countdown towards the London Marathon, and I’ve had a few people asking what sort of tech I’ll be using in the race - so I’ve put together a guide to what I’ll be using.

However, what I’ll be running with will be useless to one person, or irrelevant to another - it’s what makes you feel good. I don’t like running with a phone strapped to my arm but some people can’t do without it - and that’s OK.

To some people, a GPS watch just is an unnecessary distraction to their pure racing - these people are brilliant at monitoring their own body and pace instinctively, and I’m insanely jealous of them. Give me a tiny wizard on my arm telling me to run faster or slower, please.

So when I get to the London Marathon start line, panicking about not having the right pacing strategy or wondering if going to the toilet five times has been enough, here’s what will be strapped onto my body to help me get through:

As I said above, there’s no way I’m going into race without a watch strapped to my wrist. I love them. In fact, I love testing them so much that my friend told me she once had a dream that I was chasing her in the London Marathon with 20 strapped to each arm, screaming at her to run faster.

(She called it a nightmare. Just sounds motivational to me).

My favourite at the moment is the Garmin Forerunner 735XT - I’m a fan of what Garmin is doing at the moment with sleek design, loads of data to look at and the ability to really customise the screen to show precisely what I want.

That’s important to me: being able to see just what I want when I need to. The 735XT is pricey, and I don’t ever use the swimming and cycling functions (it’s really a triathlon watch), but I prefer it to the running-only Forerunner 630 as it’s not touchscreen.

When I start a race, I like to press a real button, not have to tap a screen. Also, that watch also once deleted a run under a wet sleeve, leaving me with no record of my 19 mile run.

I wear it day to day as well, because it functions perfectly as a smartwatch. I get notifications, can control music and decline calls - plus I’ll still get at least four days’ battery life even with a daily run.

It’s also one of the best fitness and sleep trackers, and the app is fully-featured too. The Forerunner 735XT is a beast.

However, I’ve also checked out the following watches lately if you’re interested in some other options:

I’ll be running with the Apple Watch 2 trapped to my arm - but not for tracking reasons. It’s a pretty competent unit for monitoring your runs, but that’s all it can do as a GPS watch. It doesn’t have training plans or tips to get stronger, and the range of third party apps that can do that are still pretty limited.

(Strava is now a native app on the Apple Watch - meaning you can run without needing to be connected to a phone - but it’s basic at best).

I’ll be using it as it’s got brilliant battery life for a smartwatch in a marathon (as you can see from my Chester Marathon report) while still pumping the tunes into my head.

It’s a lightweight alternative to a phone on the arm for music, although sadly it doesn’t allow me to store Spotify tracks on there.
There was an app called Spotty that was going to offer this functionality, but some legal issues with Spotify saw it halted. It’s coming, but not in time for me.

So I’ll be taking out a one-month subscription to Apple Music - it’s as fully-featured as Spotify and lets me store offline tracks. All I care about is music getting to my head - this will do.

As for other watches I've tried, the Suunto Spartan Sport Wrist HR is a chunky number that’s got a big screen and decent battery life - but it’s pretty massive and doesn’t offer much customisation. It does have one of the best wrist heart rate monitors I’ve ever tried though.

I’d urge any runner looking for a budget option to try the TomTom Spark 3 - it’s a steal these days and can do so much - including playback music through wireless headphones. It’s a little on the simplistic side, but it’s always the one I recommend checking out if you’re thinking of getting started in running watches.

I enjoyed my time with the Polar M400 - a little on the chunky side, but the Polar Flow app is good and has smart features too. It also offers some nice fitness tracking abilities for a lower price.

If you’re a new runner, steer clear of the NewBalance RunIQ watch. It’s a chunky Android Wear smartwatch that’s been designed with Strava, but apart from that feature (and most other running watches now auto-upload to the service) it’s pretty mundane and hella expensive.

When it comes to music getting into my brain during the race, there’s only one choice for me: Aftershokz Trekz Titanium.

There are far too many Zs in the name of these headphones, but they’re special for two reasons: they’re race legal and they let you hear both the crowd and your music.

They work through bone conduction, firing the sound through your head bone into your ear canals. There’s part of me that just thinks they’re really loud headphones that are pressed against the bones in front of your ears, but they do the job.

I’ll be doing a more in-depth piece on bone-conduction technology later next week, but for now, just trust me that these are a great choice for London - even if you’re allowed to use other headphones, in most races you can’t and there’s no way I want to miss any of the atmosphere.

A lot of questions I get are around heart rate monitors - simply because the average runner is waking up to the benefits of heart rate training, but most don’t like the idea of wearing a strap.

I used to be in that club, but since taking the plunge I can’t do a race or decent run without one attached. They don’t need to be too tight, just snug enough to not move.

I’m not a fan of wrist-based heart rate monitors, as they can become inaccurate too easily. For some people they can work well, and they’re a convenient option, but I can’t rely on them. There’s nothing worse that feeling like you’re dying in a race and you look down to get a read on how hard you’re working only to see you’re apparently asleep.

I use the supplied heart rate strap with the Garmin 735XT, mostly because it packs an accelerometer to monitor things like how high you’re bounding, which foot you favour and how quickly you’re tapping the ground.

I don’t need any of that information, although if I was leaning too far left or right it would give me a good insight on why I might be getting random injuries.

If you’re looking for a good basic heart rate monitor, I’d recommend the Wahoo Tickr. It’ll work with most smartphones and watches, and fits nicely. You can spend a bit more money and get the Tickr X, but that will basically only give you the ability to record workouts without a phone… the base model is fine.

There’s a lot of stuff happening in ear-based heart rate monitors at the moment too - the skin in the ear is really thin and is close to the blood flowing to the brain, so it’s meant to be hyper accurate.

Sadly I’ve got really crap ears, as they’re more like vast expanses of aural wasteland than snug zone to slip and earbud into, meaning many heart rate monitors struggle to work properly. However, I’ve found a few that work pretty well:

Bose’ SoundSport Pulse are a pair I’ve just finished testing, and while they’re also a touch expensive, the sound quality is immense, the fit surprisingly strong despite feeling loose and the heart rate monitor accurate as a result.

If you want to make more of a fashion statement, then the Moov HR is a fun choice. Taking the ‘thin skin near the brain’ idea to the Nth degree, this is a headband with an inbuilt heart-rate monitor.

It will pair with some running watches (with more coming soon) but I’ve not had the greatest time with the accuracy since using it - however, it seems more reliable for running than it does high intensity workouts.

I’ve had a good question from members of the #teamcardio group I’m part of as part of the Cardiomyopathy charity running team at the marathon, namely around whether carrying water and sweets is a good idea… and how to do it.

I’m not a fan of carrying water in races up to half marathon distance as it’s possible to go in well hydrated enough if you’re running for 90 minutes or less.

However, go over that and you’ll need to think about getting some fluid in you.

In the race I’ll be slurping from bottles along the way, as they’re mega-regular on the course, so I would say you don’t need to worry about carrying your own drinks during the race.

However, I use the Nathan Trail Mix 4 hydration belt for my training as it’s got two neat pockets for water bottles and a handy pouch for energy chews or gels - and might be a good idea for the marathon without the liquid containers.

It’s a bit late to be thinking about adding in new kit this close to the marathon, but if you are looking for one (and promise to try it out a few times before the big day…) that’s a nice choice.

Sorry for the brag

I wanted to put this in today’s diary entry but felt bad putting it too high: I WAS THE FIRST FINISHER IN PARKRUN TODAY!

(For those that don't know, Parkrun is a free 5k race every Saturday at hundreds of locations across the globe - and I love it).

It was a huge achievement for me as it was a strong battle with an accomplished runner for the whole run across an undulating course - and I really needed to dig in at the end, my heart rate pumping at a close-to-max 182 beats per minute up the final hill.

It’s a big deal this close to the race as it shows the training is coming together and it was tough today - and I’m going to need that mental fortitude to have any kind of chance in the race next week.

Being strong mentally is something I’ve struggled with hard in the past, being able to silence the internal voice that tells me I’m not good enough, not able to run at this speed, not going to be able to finish…. So to be able to question the dark voice today and maintain effort feels huge.

I love this quote from cyclist Greg LeMond when describing the improvements training can bring: "It doesn't get any easier, you just get faster.” So no matter how fast you’re planning on running the London Marathon, or any other race, effort is the big leveller.

I just want to cross that line and know I pushed to the limit - there’s nothing more I can do after that.

If you've got any tech questions ahead of the big day - or just about running in general - feel free to get in touch using the links below, or the email address in my author bio! It'd be great to answer some direct questions from runners over the next few days.