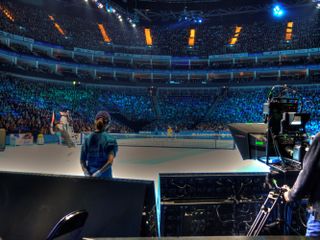 Sky has put up a behind the scenes video of how it films 3D, as it celebrates getting the Sky 3D channel into 70,000 homes.

Aside from major movies, Sky is also producing sports, entertainment, documentary and arts content for Sky 3D, as the company looks to become the home of 3D in the UK.

The latest video gives customers a glimpse behind the curtain, showing filming at the MEN Arena and the Emirates Stadium.

"This is the first time we have talked publicly about the number of subscribers taking up this exciting new service, and, even more encouragingly, around half of all the 3D TVs sold so far in the UK have subscribed to Sky 3D, with thousands more joining every week," said Sky Sports director of operations Kevin Long.

"As we approach our 100th live sports 3D broadcast, we are further cementing our position as a world leader in the 3D sports production. But producing live 3D coverage of major sporting events is not child's play.

"This exclusive behind-the-scenes video – shot on location at the MEN Arena and the Emirates Stadium – shows just how much work goes into delivering the best possible 3D experience for our customers."