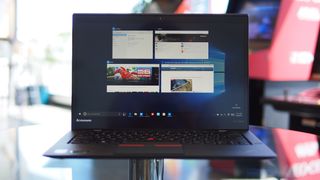 Microsoft's free upgrade strategy for Windows 10 is paying off. The company's latest operating system has been installed on more than 200 million devices to date, up from the 110 million figure that Microsoft announced just three months prior.

This means that adoption for Windows 10 is occurring twice as fast as Windows 8, which reached 100 million installs in the same six-month period.

"In fact, Windows 10 continues to be on the fastest growth trajectory of any version of Windows – ever – outpacing Windows 7 by nearly 140% and Windows 8 by nearly 400%," said Yusuf Mehdi, Corporate Vice President, Windows and Devices Group at Microsoft, in a statement.

Microsoft also boasted about its progress with helping education, enterprise and business customers upgrade to Windows 10.

In addition to the rapid consumer adoption rate, Windows 10 is currently in active pilots with 76% of Microsoft's enterprise customers, and the company has 22 million devices running Windows 10 across enterprise and education.

On the consumer side, Microsoft says that it is seeing increased preference for Windows 10 with shoppers entering the holiday shopping season. Microsoft reported that "more than 40% of new Windows 10 devices" became active since Black Friday.

Microsoft also highlighted the increased traffic and transactions that it processed in the Windows Store, but the company did not give specifics on the number of universal apps in the library. The limited number of apps was a pain point for Windows 8 and Windows Phone users in the past, and Microsoft's switch to a universal app strategy could help spur developers to create more apps for its ecosystem.

Read about our experiences with Windows 10