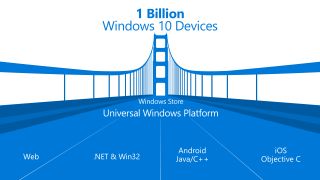 That sounds ambitious until you remember Windows is a widely-used platform already. The Microsoft ecosystem is rich with users - there are 1.5 billion people who use Office and many more in the Xbox family.

"When we look at the search terms, we see that 40% of the search terms are exactly the same. Customers are looking for your apps in all of these places (across devices)," Myerson said to the Windows developers in the audience.

"Windows is the only ecosystem that lets you get your apps to all of these devices efficiently."

We know that Windows 10 is supposedly dropping in late July of this year and we know that Microsoft is likely working on another Surface Pro. The advent of the company's augmented reality venture, the HoloLens, should also help push the numbers forward.