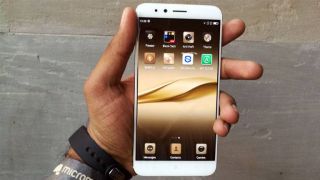 After weeks of teasing, homegrown mobile maker Micromax today unveiled their ‘premium’ smartphone Dual 5 in India at Rs 24,999. No doubt, the company has tried its best to put in all the efforts to present it as a complete smartphone. But the discussions started rolling out soon after the price was announced.

While many of us were examining about features, camera and the atypical price, some of our readers started tweeting about something that we didn’t notice. The recently launched dual-camera smartphone from Micromax has ‘borrowed’ not just one but almost everything from the Qiku 360 Q5.

Qiku is a Chinese smartphone manufacturer which came under spotlight when it launched Qiku Q Terra in India, which also features a dual-camera. The company is also known for its 360 OS that comes with bunch of customization options and added security built in it.

The Qiku 360 Q5 comes with a 5.5-inch AMOLED display with full HD resolution. Under the hood it runs a Qualcomm Snapdragon 652 octa-core SoC. It has 4GB of RAM and surprisingly 128GB of storage, which is said to be a major selling point of the Micromax Dual 5.

For imaging, the Qiku 360 Q5 has a pair of 13+13 MP cameras on rear and a 13MP front camera as well. Moreover, it has similar modes and 4K video support just like the Dual 5. Further it has a 3200mAh battery with Quick Charge 3.0 support.

If you don’t already know, the Micromax Dual 5 has exactly the same hardware specifications as on the Qiku 360 Q5. If you are wondering that it’s possible for two smartphones to come with same specifications, then you should search for Qiku Q5 and match the design elements of both the smartphones.

Moreover, the Qiku 360 Q5 also has military grade security chip and similar security features to the Dual 5. Now when it comes to differentiating both the smartphones, the only difference one can find is the logo on the back and the price.

In the beginning of the Dual 5 launch event, Micromax CEO, Rahul Sharma was briefing on what the company has been doing from last six months. No wonder it took them six months to rebrand a Chinese smartphone and call it ‘Made in India’.

We don't blame Micromax for rebranding the the Qiku 360 Q5, but at least the company should have made the smartphone a little pocket friendly.