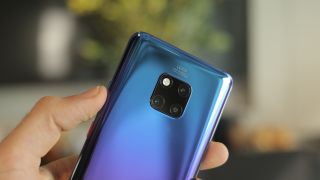 Confusion is swirling around Huawei devices since the Android ban, but one thing we still know is that they're superb photography smartphones – and judging by some new trademarks, Huawei plans to retain that crown in the Huawei Mate 30.

The trademarks are for two new camera features, Cine Lens and Camera Matrix. Given that phone companies tend to trademark names like this only for killer features, this means the Huawei Mate 30 series will be the best smartphone cameras around.

We don't actually know what the features are for, but we can make some educated guesses based on the names.

Cine Lens could be a lens that's designed specially for cinema or video capture. Most new smartphones have decent video capture, with 4K and/or 60fps, but there are many extra features that phones need to be good at recording video, like decent optical image stabilization (OIS) and quick auto-focus that many devices don't have.

We can guess, then, that Cine Lens is a fancy phrase used by Huawei to describe one of the Mate 30's cameras, likely one with powerful OIS and quick shutter speeds.

Camera Matrix probably isn't a slow-mo camera designed to capture you ducking under bullets; instead, there are a few theories as to what it could be.

Firstly, some have suggested it could just be Huawei's way of describing the particular camera arrangement on the rear of the Mate 30 – we're expecting the snappers to be in a square on a panel on the phone's back, and 'Matrix' could describe this layout.

A matrix is defined as a rectangular array of things; there are many other practical applications in a camera app of things this could refer to, like the 3x3 grid lines, the particular user interface (UI) of the app, or scene optimization techniques, so it's hard to say with any certainty what Camera Matrix means.

We'll know for sure in October, because that's when we expect Huawei to announce the Huawei Mate 30, as well as any Pro or X version that it launches alongside, so check back in then to find out what Cine Lens and Camera Matrix actually are.