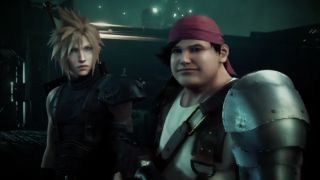 When Final Fantasy VII made its re-debut at E3 2015, people in the audience cried.

Today Sony and Square Enix revealed a new trailer for the game, and while it wasn't met with the same catharsis, the audience at PlayStation Experience clearly liked what they saw. As did we.

Yes, it all looks suitably beautiful - the two-minute trailer shows off an insanely well-rendered Midgar - but it's the new battle system that we're most interested in.

The trailer points to something a little more free than the original's turn-based system, but it's still a bit of a mystery.

Gamers have been waiting over 20 years for a remake of what many consider the best entry in the long-running series, and the fact that it will remain exclusive to PS4 is icing on the cake.

Square Enix also announced that the PC port of the original game would be available starting today on its online store.

There's still no word on a release window for Final Fantasy VII but, after 20 years of waiting, what's a few more months?