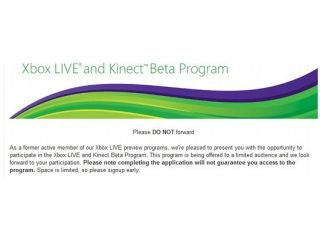 Microsoft is set to kickstart the "Xbox Live and Kinect Beta Program" soon, with a number of invites already having been sent out to a lucky chosen few.

Joystiq was first to report the news, with a number of readers sending in the invite (despite being told to not forward it on by Microsoft!).

The invite was issued via Microsoft Connect, a service which the company uses to obtain customer feedback on new products.

The invitation carries the tantalising promise of "a unique opportunity to see pre-release software."

"This isn't unusual. Microsoft always runs extensive beta tests of all its new products, and Xbox is no exception," says Jon Hicks, Editor of the UK's Official Xbox 360 Magazine. "Similar invites went out ahead of the launch of the NXE interface update."

An "audio change" will not let Kinect testers use individual or party chat with anyone that is not in the beta.

Microsoft has yet to respond to our requests for further information on the "Xbox Live and Kinect Beta Program."

We expect to hear lots more about the latest plans for Microsoft Kinect at the company's GamesCom press conference in Cologne next Tuesday 17 August.