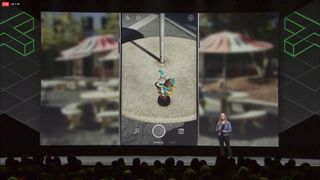 Most of the announcements during today’s Oculus Connect 4 event involved having a screen strapped to your face. But, with 3D posts, Facebook is trying to merge the worlds of virtual reality (VR) and augmented reality (AR).

Essentially, the idea is that you’ll soon be able to craft cartoony virtual 3D items in Facebook Spaces, the social network's VR social hangout zone, and then share those items with friends through Facebook’s news feed.

Your friends will then be able to interact with the objects on their PC or smartphone screen, rotating them and flipping them over from all angles. No sweaty headset required.

Facebook's answer to ARKit and ARCore

You'll also be able to create interactive objects with Oculus Medium, a platform that works in much the same way as the AR technology we’ve already seen with Apple’s ARKit and Google’s ARCore.

Not only is '3D posts' a cool concept, but the ability to interact with objects created for virtual or augmented reality without the still-expensive gear might convince Facebook users who’ve remained on the fence regarding VR and AR to jump in.

At the same time, it seems like a lot of work for a Facebook post from a 'normal' user. Advertisers, though, might find it to be a creative way to show off their products from all angles.