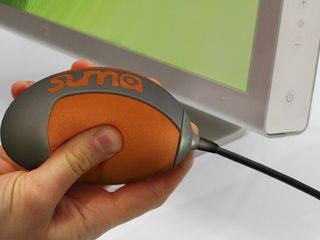 A new intuitive, low-cost user interface device (read: mouse) has been shown off by Cambridge Consultants who hope to 'squeeze' into what is a tough market.

Codenamed Suma, the device "translates the three dimensional deformation of a squeezed object into a software-readable form". So you touch it in such a way, and your gestures are fed into the computer.

Its makers are hoping that Suma will be a low-cost alternative to the cumbersome motion-capture technologies that our out at the moment.

"Although gesture-based control is a huge step, even this does not convey the subtlety and flexibility of what our hands can do," explains Duncan Smith, Head of Consumer Product Development at Cambridge Consultants.

"By capturing that complexity, Suma enables product developers in a range of industries to greatly enhance the experience of their users, adding multidimensional interaction to both existing and new applications."

So, what would we use the Suma with, well Smith explains that: "Emerging trends like 3D displays and augmented reality are bound to stimulate interest in Suma's unique capabilities, where the emergence of next generation applications is limited only by the lack of suitable input devices.

"But it's also just as relevant and exciting for existing 2D applications and web-based services, where squeeze-to-click can now become squeeze-to-control."

There's no release date as of yet but Cambridge Consultants will be showing off the device at CES 2010, so expect a TechRadar hands-on soon after.