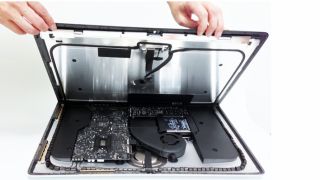 Look at what's inside

Apple's latest desktop only went on sale today, but it's already had the teardown treatment, courtesy of a Japanese blog.

Kodawarisan posted a whole host of snaps of the iMac's internals. Rather than the usual rectangular logic board, the new iMac's has a part cut out at the bottom to help it fit inside the super slim chassis. So it seems every measure was taken to keep the desktop as thin as possible.

Most of the components are under plastic compartments to keep them separate from the screen.

But it's a very tidy interior, which isn't surprising given how little space there is to play with.

Apple announced the new iMac last month. The 21.5-inch model is available now, and is the one taken apart here. The 27-inch model will ship in two to three weeks, according to the Apple site.

Both measure just 5mm thin at their slimmest parts.

The only downside seems to be the lack of optical drive. And they're not cheap either. But at least now you can see exactly what you're paying for.