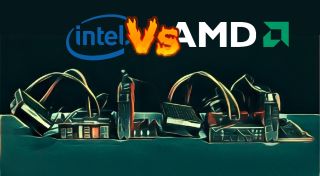 The past few years have seen something of a plateau when it came to consumer processor technology, but this year both AMD and Intel have come out swinging with mighty 16-core behemoths.

(Update: We've continued to look into why the results for the AMD Threadripper were lower than expected, and worked alongside AMD to identify any problems. It looks like the cause was due to us using a 16GB RAM kit in 2 x 8GB configuration. We've updated our test benches with 32GB in 4 x 8GB so that neither the Threadripper or the Core i9 CPUs are held back by the RAM and have re-run the tests on both machines. These tests bring back more representative scores. Our initial findings, that these tests result in an overall draw remains, with the Intel CPU performing slightly better than the AMD one, though not by enough of a margin to justify its much higher price tag. For price conscious buyers, the Threadripper 1950X is definitely the one to go for, offering superb performance for a very good price. However, if you have the budget and want nothing but the fastest-performing 16-core CPU, then the Intel Core i9 -7960X is the one to go for. Either way, you're getting an excellent CPU that will be incredibly future-proof.)

Almost everything about the Threadripper is over the top, and AMD knows it, from the physical size of the chip, the way it’s installed on a motherboard, the impressive-looking packaging and even its name.

It’s clearly a processor aimed at enthusiasts, and we’re impressed with AMD’s overall marketing and presentation of the Threadripper. It’s clearly excited and proud of the CPU, and that feeling is infectious.

Not to be outdone in the high core count stake, Intel then announced its line of Core i9 Skylake X processors, which included the 18-core Intel Core i9-7980XE and the 16-core Core i9-7960X. However, while AMD offers the Threadripper with a lot of bombast, Intel’s marketing of the Core i9-7960X is more restrained, so no dramatic-sounding names or fancy-looking packaging here.

However, the proof is in the performance and price of these CPUs, so, with both AMD and Intel releasing 16-core CPUs with 32 threads, we thought we’d pit them against each other to see which comes out on top.

For this test we tried to keep the two systems as similar as possible, with the processor and the motherboard being the biggest differences. For the AMD Threadripper 1950X machine, the components were:

Our test bench for the i9 processor is pretty similar to the Threadripper setup, with:

First we ran CPU benchmarks, starting with the Geekbench 4 suite of tests that puts the processor through its paces, replicating real-world tasks and applications, sometimes very complex ones, and uses those to see how the processors react. A higher score means the CPU is more proficient at completing those tasks.

In the single-core benchmark the Threadripper 1950X scored 4,719, while the Intel Core i9-7960X beat it with 4,919, which means that despite the higher clock speeds of the Threadripper the 7960X’s cores proved more powerful, helped by the higher boost speeds.

Next up were the Cinebench benchmarks, which test the CPU and GPU capabilities of the machines, and while the CPU benchmark is the most telling result for this battle between AMD and Intel, the GPU test can show us which CPU can help the graphics card achieve higher frame rates.

The CPU test uses the PC’s processor to render a photorealistic 3D scene while running a number of algorithms designed to stress all available processor cores, so it’s a great way of seeing how good these processors are.

First up was the Threadripper machine, which scored 3,015, but the Core i9 machine scored a touch higher at 3,149. The GPU test results saw a similar difference, with AMD scoring 89.10 FPS while Intel achieved 138.68.

The first benchmark we ran was the 3D Mark Fire Strike, which tests how well machines can handle demanding 3D graphics. While there’s no doubt that at the moment 16-core processors are overkill for gaming, these benchmarks will give us an idea of the power differences between the two.

In this test the AMD Threadripper 1950X machine achieved a mighty score of 22,462, a big improvement over the 15,444 scored by the AMD Ryzen 7 1700 from our original AMD vs Intel showdown: what’s the best gaming CPU? head-to-head test.

In truth, both these processors (and the GTX 1080 Ti graphics card) are powerful enough to easily blow through the standard Fire Strike tests, but what about a more demanding benchmark? We also tried out the 3D Mark Fire Strike Ultra (4K) benchmark, which as the name suggests tests how well PCs can run ultra graphical settings in 4K resolutions.

As is to be expected, the scores for each CPU were lower than the standard test, with the AMD Threadripper 1950X machine scoring 7,157 and the Intel Core i9-7960X scoring 7,233.

The Sky Diver benchmark isn’t as intensive as the Fire Strike tests, but it’s still a worthwhile tool for seeing just how well a PC can handle DirectX 11 graphics, especially when it comes to physics.

More realistic physics can mean more immersive games, so the higher the score here, the better.

First up was the AMD Threadripper 1950X machine, which scored a hefty 52,787 in the test. However, the Intel Core i9-7960X machine gained a decent lead lead with 59,785. Can the Threadripper stage a comeback?

We also wanted to see how well these processors coped with modern games, even though many can’t yet take full advantage of 16-core CPUs. Total War: Warhammer 2 is a real-time strategy game which gives your processor a decent workout as it moves vast armies across the battlefield, and that makes it an excellent test for these chips.

Round 8: Middle Earth: Shadow of War

Next up we put the two machines through their paces with Middle Earth: Shadow of War. This recent open-world game is certainly a workout for your graphics card, but does the type of CPU you use have an effect as well?

Our final round is perhaps the most important one, as it puts the performance differences between the two chips into context. AMD has traditionally offered processors (and graphics cards) that are lower-priced than its competitors', and with the AMD Threadripper 1950X we’re pleased to see that this has continued. That’s not to say the Threadripper is cheap – at $999 / £999 / AU$1,440 it’s certainly a big investment.

However, the Intel Core i9-7960X is a fair bit more expensive at $1,699 / £1,700 (around AU$2,150). That's 70% more, but while our tests show the Intel CPU has a performance advantage over the AMD Threadripper, it’s around the 50% mark – and we should reiterate that the Intel doesn’t outperform the Threadripper consistently.

So, is an at-best 50% performance increase worth a 70% price premium? We’d say not, actually, as the Threadripper is still an awesome-performing CPU, more than capable of handling modern tasks. If you’re a gamer, many games won’t even take advantage of the Threadripper1950X’s power, let alone the Intel Core i9-7960X’s, so at the moment you may be paying more for performance you won’t benefit from.

However, if you do a lot of content creation, or work with a lot of resource-hungry applications where multitasking is essential, the Intel Core i9-7960X's performance advantage in some areas will be well worth the money.

We’ve been incredibly impressed with both CPUs, and they show what a bit of healthy competition can do to the processor market. While the Intel Core i9-7960X takes the performance crown, the AMD Threadripper 1950X is no slouch either, and its lower price makes it an incredibly tempting purchase. For those reasons we’re calling this battle the two 16-core behemoths a tie.