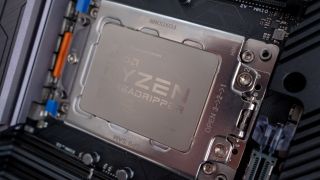 The AMD Ryzen Threadripper 3960X is the name of one of AMD’s incoming 3rd-gen chips, and it’s a 24-core processor, at least according to an Ashes of the Singularity benchmark which mentions the CPU.

This was spotted by the prolific leaker TUM_APISAK, who spotted the processor clearly labelled in the benchmark and tweeted it without any further comment.

So it would seem that the 3960X is the name of the incoming 24-core (48-thread) CPU which is to be the initial top-dog offering of Ryzen Threadripper 3rd-gen set to debut in November as previously revealed by AMD.

Looking at the current-gen Threadripper chips, it’s the 2970X which is the 24-core model – compared to the ‘60X’ with the next-gen products. Which would seem to suggest that Ryzen Threadripper 3rd-gen will step up the core counts through the range.

Speculation runs that the 3970X will therefore have 32-cores, and the 3980X 48-cores, with a flagship 3990X brimming with 64-cores (128-threads). Naturally, bear in mind that this is pure guesswork, based on an unsubstantiated leak too.

However, the leak is from a reputable source, and as Videocardz points out, yesterday witnessed another leak from the AMD Master Product list (spotted by another well-known leaker on Twitter, Komachi). This particular spillage appears to confirm that Threadripper 3rd-gen chips will have a TDP of up to 280W. And that matches the TDP of the 64-core Epyc server processor AMD has just unleashed, funnily enough…

So putting two and two together with all this, are we ending up with 64 for Ryzen Threadripper 3rd-gen? Okay, so that maths doesn’t add up, but this speculation might.

After all, this isn’t the first we’ve heard of a possible 64-core flagship for the new Threadripper chips – the CPU has been rumored in the past, so maybe we’re justified in getting a little more excited now.