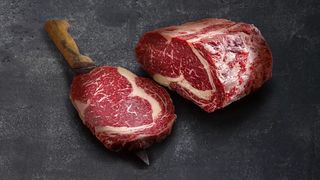 3D-printed beef steaks and chicken could be on the menu in European restaurants as soon as next year, and meat printers could be in your home – if you want one – possibly within the next few years.

So reports The Guardian, highlighting Israeli and Spanish operations which are printing beef and chicken products with the same (fibrous) texture, appearance and flavor as real meat, but with no harm to animals involved (they are made from plant proteins only).

One such firm is Israel-based Redefine Meat, which is using “advanced food formulations” along with “proprietary 3D printing technology” to make what it calls the “holy grail of alt-meat”.

3D printers are capable of printing meat substitutes from either plant protein or laboratory-grown animal cells.

The benefits are widespread and include a massively reduced overall impact on the environment compared to cattle farming, and on the health front, the 3D-printed meat product has no cholesterol either.

According to Redefine Meat, meat alternatives is the fastest growing segment of the food market, and is expected to be a $140 billion industry by 2030.

Supermarkets – then your home

Redefine Meat expects to have its products in European restaurants in early 2020, and Novameat, a similar operation based in Spain, is aiming to equip Spanish and Italian restaurants with plant-based 3D printers before 2020 is out.

Restaurants in the UK will have the technology soon after, and the chief executive of Novameat expects such 3D printers to be in supermarkets in 2021 – and potentially in your own home a year or two after that.

Novameat’s printers use capsules of pea and rice proteins to print steak or chicken currently, with pork and lamb, along with salmon capsules, expected to be available soon.

Development in this field could be surprisingly fast then, not to mention diverse – we’ve already seen Aleph Farms, another Israeli firm, show that artificial meat can even be 3D-printed in space.