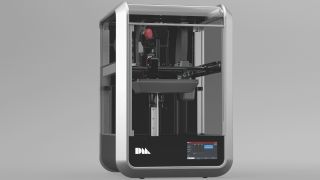 Desktop Metal has introduced Fiber, claiming that this is the first 3D printer which delivers ‘industrial fiber performance’ in a desktop printer which is far more affordable than traditional solutions.

These are objects with a high level of strength and rigidity – the parts produced are twice as strong as steel, yet only 20% of the weight – which would traditionally require AFP systems that cost in the millions.

Desktop Metal’s Fiber is far more affordable (we’ll come on to pricing shortly) and is also capable of printing much faster, to boot.

Ric Fulop, CEO and co-founder of Desktop Metal, explains: “For the first time, Fiber printers combine the material properties of high performance AFP continuous fiber materials with the affordability and speed of a desktop 3D printer.”

Specifically, Fiber miniaturizes AFP tech, combining it with Fused Filament Fabrication and employing a robotic tool changer architecture (with the ability to store up to four tools, including printheads for different materials, or future expansion with functionality such as automated in-process inspection).

Uses for such 3D-printed parts are highly diverse and include components for electronics, cars, planes and so forth, and particularly where lightweight but strong materials are needed such as racing cars or bicycles, or indeed wheelchairs.

Will Turner, President of Turner Motorsport, enthused: “Weight is everything in racing. Being able to replace critical metal components with 3D-printed continuous fiber means we can retain the strength of metal while lowering the overall weight of the car – making it even faster and more competitive.”

The Fiber printer is set to ship in the spring of 2020 and pre-orders are being taken, but note that the product is provided as a hardware-as-a-service subscription plan, of which there are two variants.

The cheaper tier starts at $3,495 per year, and allows for the printing of nylon-based continuous fiber materials, with the more expensive one – which adds the ability to work with PEEK and PEKK-based materials – starting at $5,495 annually.