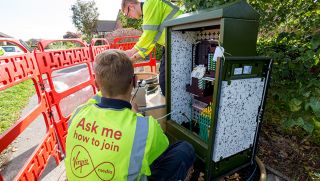 Update: Virgin Media contacted us to note that uSwitch has since retracted its initial statement (seen below), and Virgin Media again confirmed “there is no national broadband outage”.

Virgin Media also said that Downdetector.co.uk doesn’t accurately reflect the status of its network, and relies on an automated algorithm to determine the number of tweets over a certain period of time.

Virgin Media further clarified: “It’s wrong to suggest there is a major problem with our network. Right now, our national network is running well and there is not a widespread issue with our broadband services.

“We are carrying out essential maintenance on our website at the moment which means some pages may not be working as usual. We’re working hard to get these updated as soon as possible but this does not affect customer’s broadband services.

“Of course outages can occur at a local level – this is all part of having a UK wide broadband network – but there is no major issue impacting our broadband services right now.”

Virgin Media’s broadband service has reportedly been down for some folks since early Tuesday, November 19, in what would appear to be a widespread outage across the UK – although the company claims its service hasn’t been affected, and is functioning as normal.

As the Independent reports, Virgin Media issued a statement to say: “Our broadband services are running as normal – there is no national broadband outage affecting our network.”

However, there have been a number of reports online about Virgin Media internet connections going down, and on Twitter we’ve read about folks experiencing outages as early as 4am this morning.

Furthermore, Downdetector, a site which monitors major bouts of downtime, observed a large spike of 154 problems reported by Virgin Media users at just after midnight last night, and those reports gathered even more momentum after 9am this morning, peaking at 285 at just before 11am.

So that would seem to point to gremlins being in the works somewhere, and compounding matters is the fact that the Virgin Media status web page – which provides information on broadband faults – is also unavailable because the company is doing some ‘upgrade work’, according to a placeholder message.

The site remains down at the time of writing, providing no help for any frustrated broadband users.

We received an email statement from Dani Warner, who is resident broadband expert at uSwitch.com, noting that: “Virgin Media is in double trouble. First their broadband went down, then customers looking for a status report found the firm’s website was ‘undergoing essential work’.

“It’s concerning that Virgin Media isn’t communicating properly with customers – many complained on Twitter that they couldn’t get through to the company on web chat either.”

As noted, however, Virgin Media has come forward to communicate a message just now, stating that there isn’t, in fact, a widespread outage despite any of these reports.

If nothing else, it would really help if the status page was fixed. And folks are still complaining about outages on Twitter, that’s for sure – just check out the most recent tweet we’ve seen of a customer who isn’t impressed with Virgin Media’s latest statement...

They say there is no outage. Nonsense we've got nothing here, and when you phone their helpline that's dead too! #virginmedia https://t.co/h8y1q7mEeWNovember 19, 2019