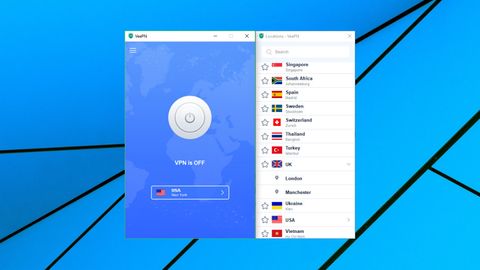 VeePN has too many major issues for us to recommend it right now, but there's also a lot to like here. If VeePN can address these problems, it could grow into a quality VPN.

Panama-based VeePN may not be a big name in the VPN world, but point your browser at the company website and you might wonder why, because it seems to have plenty to boast about.

You get apps for Windows, Mac, Android, iOS, Linux and more, for instance. Chrome, Firefox and Opera extensions. You're able to set up the service for immediate use on up to ten devices, and connect up to five of them simultaneously.

The network is a decent size with 2500+ servers in 42 countries. Although these are mostly in the US and Europe, there are 226 servers in Asia Pacific, 102 in the Middle East and India, and 30 in Africa.

VeePN claims to more than cover the fundamentals: 256-bit encryption, a kill switch, support for some of the best protocols (OpenVPN, IVEv2), the option to have a custom dedicated VPN server for maximum performance.

Pricing on the monthly plan is higher than some at $10.99, but that falls to a more reasonable $5.83 on the annual plan, and just $1.67 if you sign up for five years. We wouldn't normally recommend that length of subscription, but if you like the service, and you use it for only two years, you'll have got decent value for money.

VeePN supports a vast range of payment options, including card, PayPal, Bitcoin and other cryptocurrencies, and host of other options via Paymentwall.

There's no trial or free plan, but if you buy a plan and run into problems, you're protected by a 30-day money-back guarantee. We checked the small print for annoying catches ('you mustn't have connected more than once'), and found nothing alarming. If anything, VeePN falls over itself to be helpful, saying that it might give refunds after 30 days if you had technical issues, contacted the company and it hadn’t resolved the situation.

While VeePN looks great, at least initially, we soon noticed a problem. The website often feels it's more about marketing than providing genuinely useful information.

For example, we're told that company has developed its own custom protocol, Smart VeePN, for instance, but what is this, how does it work, what is it for? We couldn't find any significant detail.

Elsewhere, although the website repeatedly hints that you can install VeePN on your router, we couldn't find any guidance on doing this. The Downloads page has a router icon, but it's greyed out and doesn't link to anything; the support site told us it had four matches for the keyword 'router', but didn't display any of them.

Occasionally the website oversells the service to the point of making claims which simply aren't true. For example, a troubleshooting page answers the question 'Does VPN slow down my connection?' like this:

'No, we don’t. Actually, it’s quite the opposite – your connection speed can only increase while you are using VeePN. When you connect to one of our servers, you conceal your Internet activity, thus removing speed caps and bandwidth throttling. Enjoy!'

Using a VPN adds an extra encryption and routing overhead to your internet traffic, usually slowing it down, if only a little. Although some users might see an increase by avoiding speed caps, this won't be most people's experience, and the idea that 'your connection speed can only increase while you are using VeePN' is, what's the word we're looking for? 'Garbage', 'nonsense', arguably 'deceptive', maybe just 'wrong' - something like that.

We wanted to take up at least some of these issues with the supposed 24/7 live chat support, but that turned out to be a challenge. We regularly opened the chat window, only to be told that 'our agents are not available right now. Please leave a message and we'll get back to you.'

When we eventually got to ask an agent about router support, we were told that 'we create manually the router configurations for each user. We can send if you request it, but unfortunately, we are still working on tutorials.'

That's about as feeble a response as we've ever seen, and it's not just relevant to routers. If a provider doesn't make its OpenVPN configuration files and details publicly available, then it's going to be much more difficult to set up a host of other platforms. And the 'still working on tutorials' line is nothing but an excuse. If the apps are using OpenVPN, VeePN could make a set of OVPN files available for experienced users, at least, right now.

VeePN promises 'no activity logs, no connection logs' on the front page of the website, but we know from experience that the small print can tell a very different story.

But in this case, VeePN's privacy policy expands on the claim by telling us everything it doesn't do:

"We do not collect logs of your activity, including no logging of browsing history, traffic destination, data content, or DNS queries. We also never store connection logs, meaning no logs of your IP address, your outgoing VPN IP address, connection timestamp, or session duration."

The policy goes on to describe some very minimal session logs, covering 'the total amount of web traffic for each session and session dates', as well as 'encrypted information about the number of connected devices for each account.'

That's understandable, as VeePN needs to police its limit of 10 simultaneously connected devices. Whether it's necessary to log session dates and traffic used is more open to question, but if there's no record of your outgoing IP address, there's nothing here that can link any internet action back to your account.

There's no way to confirm that VeePN really is following these rules internally, of course. That's why we'd like all VPNs to follow the example of TunnelBear, VyprVPN, NordVPN and others and publicly audit their systems for privacy and security. VeePN is at least saying all the right things, but the website issues we mentioned earlier leave us wondering how reliable these might be.

The company claims another privacy benefit beyond logging, with a blog post stating 'VeePN is registered in Panama, which means the service doesn’t have to abide any of the data collection laws enforced by the UE or US.' ('UE'? EU, presumably.)

While jurisdiction is important, we couldn't find any more detail on this beyond VeePN blog posts. There's no company address, for instance. No information on which country has legal jurisdiction over the details in the small print. It all seems unusually anonymous, even by VPN provider standards. That doesn't mean VeePN is doing anything wrong - it's not even evidence of that - but we'd like a lot more transparency on the company structure before we credit it for any Panama base.

VeePN's signup procedure is simple, straightforward, and much like almost every other web service you've ever purchased: choose a plan, hand over your email address, pay via the usual routes and you're ready to go within seconds.

In this case, the VeePN website directed us to a Download area where we could grab one of its many apps. We choose the Windows offering, downloading and installing it without any hassles.

The client interface followed the same familiar pattern. There's the simple app-like front end, just a large round Connect button and the currently selected server. A location list includes all VeePN's countries, while a Favorites system makes it easier to access key servers. And although there are only a few settings, they cover the basics: startup behavior, your choice of protocol (OpenVPN, IKEv2, 'VeePN Smart TCP' and 'VeePN Smart UDP'), an optional kill switch and DNS leak protection.

While this is just about enough functionality to get by, the client has plenty of issues. There's no 'automatic' server option to choose your fastest location, for instance. No server load or latency figures to help you choose manually. By default, there are no desktop notifications to let you know when the client connects or disconnects, either, although you can turn these on in the Settings panel.

Once you connect, the client displays your chosen country and city (if appropriate), but there's no information on your IP address. And unlike many competitors, you can't directly close the current connection or open a new one from the client's system tray icon. That's a pity, as it can be a far more convenient way to work.

VeePN's Windows client has a kill switch that, in theory, shields your identity by blocking internet access if the VPN drops. Unfortunately, our tests showed the reality can be very different.

When we forcibly closed the client's IKEv2 connection, it did nothing for several seconds. Eventually the interface updated to say 'VPN is OFF', but you wouldn’t see this if the client was minimized. What's more, even when we enabled the 'Notifications' setting, the client didn't display any warning that the connection had dropped.

Worst of all, the kill switch did precisely nothing. Our real IP address was exposed from the moment the connection dropped, without the client displaying any warning. That's just about as bad a result as you can get.

We wanted to check what happened with OpenVPN connections, as kill switch performance can vary by protocol, but that turned out to be a challenge. VeePN doesn't manage OpenVPN connections by using the regular OpenVPN.exe executable, limiting our testing options. When we tried disabling VeePN's virtual network adapter, though, the client worked more or less as it should, displaying a 'Disconnected' notification and blocking internet access.

There was more positive privacy news in our next checks, where multiple privacy-testing websites found no sign of any DNS or WebRTC leaks.

VeePN boldly claims it allows you to 'access any blocked websites from anywhere in the world', but that wasn't our experience. The service got us in to US YouTube and BBC iPlayer, but US Netflix displayed its standard 'you seem to be using an unblocker or proxy' message and refused to stream content.

The review finished with some decent speed results, though, as our performance tests found UK servers averaging a reasonable 55-60Mbps on a 75Mbps test line, while US locations managed a capable 45-50Mbps. There were issues with one or two of the more distant locations - Vietnam struggled to 4-8Mbps - but even these were generally very usable, with for example Thailand hitting 12-14Mbps and Australia averaging 18Mbps.

VeePN is a difficult service to score, because although it scores in many areas (network, speeds, apps, ease of use), it also has some very major failings (broken kill switch, dubious website claims.) Don't rule the company out entirely, but check back in six months, see if the issues have been addressed.