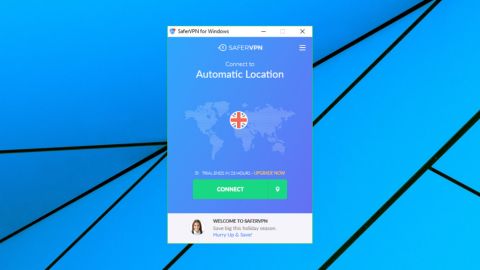 SaferVPN has a few issues, but nothing we can't forgive, and overall the service is fast, friendly, and with a wide range of apps and setup options.

SaferVPN may not have highest of VPN profiles, but scrolling down its website reveals that the company offers plenty of interesting and appealing features.

There are Windows, Mac, iOS and Android apps, and Chrome and Firefox browser extensions. OpenVPN support and some detailed tutorials allow setting up the service on other platforms and devices. Automatic protection enables connecting whenever you access insecure Wi-Fi, and there's 24/7 customer support via live chat or email if anything goes wrong.

The network is smaller than some at 700+ servers spread across 34 locations. Torrent support is limited to only three (Canada, Netherlands, Spain), but it's good to know it's available.

The website gives you some real detail to explore. SaferVPN doesn't just state that it supports IKEv2, OpenVPN, L2TP and PPTP, for instance – there's also a detailed web page explaining each protocol, when you should use it and when you really shouldn't.

There's also a free trial to sample the service. It's only 24 hours, which isn't long enough, but you don't have to provide any payment details, and if you sign up and regret it, you're also protected by a 30-day money-back guarantee.

SaferVPN's website clearly displays the company’s no logging policy: "We never log or monitor your VPN network traffic. What you do online is your business and we aim to keep it that way!"

While that sounds good, it's not as specific or clearly defined as we would like (what does this mean by 'personal data', 'metadata', what is logged?), and other elements of the small print give a very different picture.

For example, the 'Unlawful Activity' clause of the Terms of Service states that if you've violated SaferVPN's rules, the company may disclose details "relating to your profile, email addresses, usage history, posted materials, IP addresses and traffic information." If you don't break the rules then presumably this won't happen, but it does seem as though SaferVPN is at least capable of logging a lot of data.

The acceptable use policy also raises some issues for us. For example, a very restrictive ‘obscenity’ clause says you must not "upload, post, or otherwise transmit any content which is obscene, indecent, or pornographic, or which is otherwise objectionable." Of course, we're 100% in favor of rules about illegal content, such as child pornography, but extending the rules so far that they could catch almost anyone is more of a problem.

Getting started with SaferVPN is exceptionally easy. We entered our email address, tapped a link in a follow-up email, chose a password and were offered a choice of apps (Windows, Mac, iOS, Android and the Chrome and Firefox extensions.) We chose the Windows client and it was downloaded and installed within seconds.

The client has a very familiar interface. You can get connected to your nearest server with a click, or choose your preferred location from a list. This is relatively basic - you can't view locations within a country, there are no server load figures or ping times - but a Search box helps you find what you need (type NE to see only Netherlands and New Zealand), and you can mark commonly-used servers as Favorites for easy access later.

We think there's a small usability issue in SaferVPN's decision to display its location list in a separate window, rather than within the main client console. This then stays open until you manually close it, even once you've connected. When it is open, sometimes the location window position is linked to the main console (drag one and you also move the other), and sometimes it isn't. This isn't a critical problem and we figured out the rules, but the idea still seems a little pointless, and we much prefer the approach of handling location lists within the same interface as everything else.

There's a smaller issue in the client not using desktop notifications by default to alert you when you're connected or the VPN connection drops. This can be a problem, as if the connection fails, you may not realize until you next look at the client interface. But this is only an issue with the default settings, and you can turn notifications on from the Settings box with a click (assuming you notice the problem).

There are plenty of other options, too, including the ability to change protocol (OpenVPN, IKEv2, L2TP, PPTP), automatically connect when you access untrusted networks, and use a kill switch to block internet access if the VPN fails. You can't do much in the way of fine-tuning - there's no way to choose between OpenVPN UDP or TCP connection types, for instance - but SaferVPN covers the basics very well.

One of the major benefits SaferVPN claims to offer is its ability to 'access blocked sites', allowing you to 'kiss restrictions goodbye and access all your favorite sites from anywhere in the world.'

The Windows client tried to point us in the right direction by recommending 'US Streaming' and 'UK Streaming' locations. We connected to the UK server and it immediately enabled streaming BBC iPlayer content, a very good start.

Netflix has some of the best VPN-blocking systems around, but SaferVPN wasn't deterred, and its US Streaming location again gave us instant access to US-only Netflix content.

UK to US connections were speedy and reliable, with east coast performance reaching 55Mbps, while west coast servers were barely any different at 45-50Mbps.

We had to go long-distance to run into any problems, with Australia barely reaching 10Mbps and Thailand struggling to 2-3Mbps.

We rounded off our tests with a privacy check, and weren't surprised to see SaferVPN passed here, too, with DNS and WebRTC leaks safely plugged at all times.

It's not the largest or most powerful VPN we've used, but otherwise SaferVPN is an appealing service: generally speedy, mostly easy-to-use, with lots of clients and a free access-all-areas 24-hour trial to check it out.