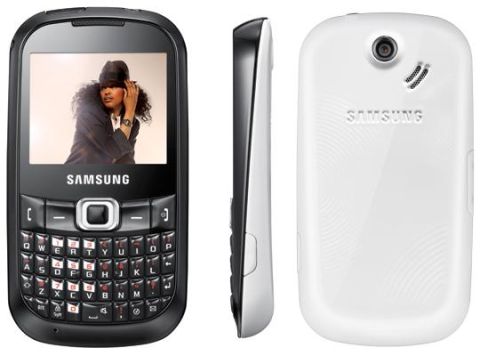 A disappointing effort from the Genio line-up that doesn't seem to know what phone it's trying to be.

Available initially from Orange from under £70 on pre-pay, the Genio QWERTY is a very affordable alternative to BlackBerry-style message-centric devices.

It joins the low-cost touchscreen Genio Touch in Samsung's budget portfolio, with the Genio QWERTY leaving out the touch-and-swipe control interface and instead adopting a more conventional 2.2inch display and physical control system to wow its users.

It maintains the bright and colourful bodywork of the Genio Touch with swappable coloured back panels supplied in-box and others available as extras.

As well as emailing, texting and instant messaging capabilities, the Genio QWERTY is pitched at social network users.

The Orange-flavoured version we reviewed adds optimised online access to services via its Orange World portal, with links for services including Facebook, MySpace, Flickr, Picasa, Friendster and Photobucket.

There's no 3G to speed along online activity though (nor Wi-Fi, as you'd expect at this sort of price) – the Genio QWERTY is a quad-band GSM phone only, chomping through data at more modest GPRS/EDGE speeds.

The Samsung Genio QWERTY's onboard media capabilities include music and video player applications plus an FM radio – with a 3.5mm standard headphone jack so you can upgrade the supplied earphones.

Support for MicroSD card memory expansion is also included, and the Genio QWERTY's budget price tag is reflected in a modest 37MB of onboard storage.

The phone's camera snapping credentials are limited to a low-key 2MP camera on the back panel - but hey, you get what you pay for.

Samsung has trimmed costs with the display too. The 2.2-inch screen is a low-resolution (220x176 pixels) 65K-colour effort, rather than the sort of higher quality displays we've seen in recent Samsung devices.

That means graphics are a bit blockier and less refined, which is noticeable in graphic-rich applications such as web browsing and image viewing.

Like most BlackBerry-style devices, the display has a landscape orientation that's designed to be more messaging friendly on a wide-bodied device.

The Genio QWERTY's vital statistics – 110(h) x 59(w) x 12.9(d)mm and 94g – are slim and light enough to slip comfortably into a trouser pocket without questions over whether you're pleased to see people you meet.

The curvy plastic bodywork is reminiscent of several recent Samsungs including the Genio Touch, the Blade and the Jet.

Like the Genio Touch, its 'Fashion Jacket' back panel battery covers can be swapped. Included in our box were three such 'Jackets', in black, deep yellow and yellow with orange swirls, which work strikingly with the Genio QWERTY's glossy black with yellow and chrome trim front.

Side volume keys and the dedicated camera button on the side are splashed yellow, while the number keys on the QWERTY keyboard are also highlighted with yellow blocks, so you can quickly pick them out from the rest.

The 37-key QWERTY keypad isn't the most spacious we've encountered, although the four lines of keys are decently separated and contoured sufficiently.

This enabled accurate typing with one or two thumbs, and our large fingers didn't struggle too much in achieving reasonable typing speeds.

Among the QWERTY buttons are 'quick keys' for certain feature shortcuts, including new messages and the music player – although Samsung has also replicated some of these among its user interface shortcuts onscreen and via the navigation controls.

The control panel arrangement above the QWERTY keypad revolves around a typical navigation D-pad, which is nicely raised against the surface for quick and responsive thumb manipulation.

Immediately next to this are large softkey buttons, which initially feel oddly placed, as they're not adjacent to the relevant screen softkey options.

A bit of usage means you'll quickly get used it though. Call and End keys perch on either flank of the control panel, and again are pleasingly substantial.