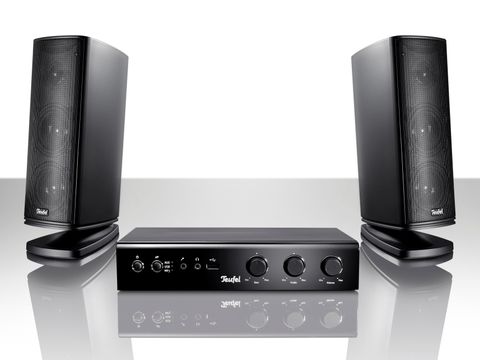 Teufel is starting to make a name for itself in the mainstream PC speaker market, but up until now its offerings have been mainly 2.1 systems, with oversized sub-woofers with more bark than bite.

Now it has launched the Concept B 200, a 2.0 speaker system designed with music loving PC users in mind.

The Concept B 200 system is an intelligent addition to Tefuel's PC audio line up, partly because it has ditched the obsession with bass by creating a 2.0 system, but mostly because of the CB 200 CS Control Station - a separate amp designed to make your PC audio sound that extra bit more amazing.

The Control Station resembles a small hi-fi separate, and you can feel the quality immediately. There's a reassuring weight which reveals the quality held within.

One of the problems with normal PC speakers is the use of your PC's soundcard for amplification. Most PCs use weak onboard soundcards, which is fine for the majority of people, the ones who use the supplied iPod headphones for example, but if you're discerning about sound then you'll appreciate that this doesn't cut it.

What's more, some speaker systems try and amplify the crummy sound of your PC's crummy soundcard, which unsurprisingly results in crummy sound.

The Teufel system ignores your PC's soundcard by using USB to connect to your PC, and then does the amplification itself, resulting in superior definition, clarity and volume.

The control unit has bass, treble and volume control, which trumps many of its competitors, and means you can fine tune music to your tastes, all from the comfort of your desktop.

As well as USB, there's also auxiliary and MP3 inputs, so you can connect other devices around your home such as an iPod or even a tape machine if you're still living in 1993. Unfortunately, iPod users will have to connect via audio jack, as there's no way to utilise any of the USB ports with your iPod cable.

However, iTunes will sync to your device and charge it while it's connected to the control unit.

Of course, the control unit is only half the story in this 2.0 system, and there's also a pair of 60W speakers which have the task of delivering all this amplified audio and doing the technology and your music justice.

We breathed a sigh of relief here too - Teufel hasn't let the side down - the speakers are warm sounding and the fidelity is incredible.

The speakers are large tower shaped affairs, which rise 30cm high. There's more reassuring weight here, especially compared to the poor speakers which come with the Teufel Motiv 2 system, and there's no danger of them toppling over.

There are no problems with volume and you can turn this system right up without distortion or loss of quality. The sound packs a punch that is capable of rocking a party as well as providing a late night accompaniment to your work.

Despite being aimed at PC users, the Concept B 200 system matches lower end professional speakers in terms of frequency response, boasting a range of 80-20,000Hz which means it's capable of handling deep bass.

Despite heaping the praise on the Concept B 200, bass is an area where it's lacking. After complaining about Teufel's obsession with bass on the 2.1 systems, the Concept B 200's left us wanting for more.

Yes, there's bass control on the shiny unit, but this spent its entire time at two thirds volume, with occasional guilty tweaks to max, when we felt there needed to be more kick.