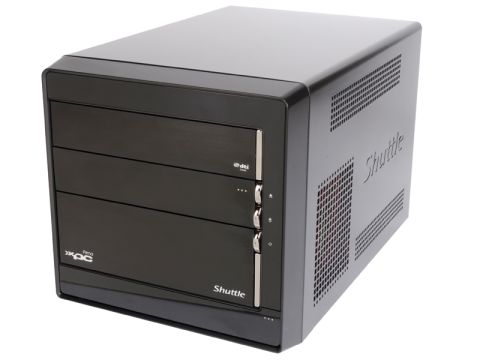 We'd recommend the SX38P2 for any gamer after a small rig

The daddy of Micro-ATX barebones systems. Worth every penny if you’re after a small PC

Unfortunately building a gaming rig out of one is usually impossible, with space enough for nought but a puny pixel pusher. Not with Shuttle's latest barebones system though; the XPC SX38P2 is just about as high end as you could wish for.

Capable of some great gaming

Squeezed into this Micro-ATX box of wonders is an X38 Express motherboard, support for the latest Intel Penryn CPUs and even full length CrossFire.

When complemented with suitably high-end components you will have a hardcore gaming PC. The impressive World in Conflict scores put it right up there with the best desktops.

The only sacrifices you make by going small are the 450 watt PSU's lack of upgradeability and storage is limited to only three hard disks. Neither turns out to be
a big problem.

Whether used for gaming or as a media centre, the SX38P2 won't disappoint. There's enough space to fit either two video cards with a single slot cooler (like the Radeon HD3850) for CrossFire, or a single card with a beefy heat sink.

All you need to know though is that you can definitely fit a full size GeForce 8800 in here. Hell, you could fit AMD's gigantic 3870 x2 if you could power the damn thing.

Along with four slots for DDR2 memory there's all the usual ports, although the fingerprint scanner is a bizarre addition, but runs across Shuttle's recent barebones range.

A lot of thought has gone into making upgrading as painless as possible. Nothing gets in your way when you poke around inside the case.

The RAM slots are within reach at the side, and all SATA and power connectors are clipped out of the way. After removing the hard disk caddies you have clear access to the CPU, and its custom heat sink comes off painlessly.

The internal tidiness isn't just for looks, airflow is even more important in such a small case, and with fewer obstructions, the side mounted fans can do their job. If the PC begins to overheat though, you'll know about it fast, since the spinning fans will begin to sound like a chainsaw.

Meanwhile, the three hard drives, a quad-core chip and Crossfire will tend to generate a wee bit of heat...

We'd recommend the SX38P2 for any gamer after a small rig.

It's a powerhouse, simple to upgrade and easy to lug around for LAN gaming. Admittedly, you are shelling out £450 for just a case, motherboard and PSU, but you'd be hard pressed to find a better box.