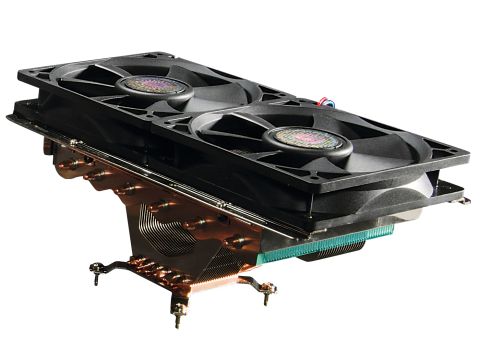 Does a good job overall, but quite a bulky solution

This is a cooler that seems like it could cause metal shortages across the world.

A gigantic lump of a heatsink makes up the design that spreads itself all over your case's internals. And while it's rather large, it's also svelte with it; it's low enough for almost any case, and narrow enough at its base that it won't foul on most motherboards.

It comes naked and fanless out of the box, and it's then up to you to equip it for proper cooling. You can fit your choice of 120mm fans to the top, or choose not to, although we wouldn't advise running this passively on a modern chip.

Nonetheless, the option is there if there's enough airflow through your case. Bolt one or two fans on, though, and the wide heatsink should blow a little air over your other components too. While it's not going to keep anything ice cold, it's nice to know that your RAM and FSB will get a little attention.