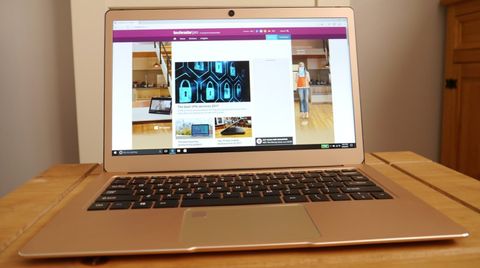 The Xiaoma 31, when considered in its own right, is a worthy laptop. However, it represents poor value-for-money compared to the competition, and even its siblings, the Xiaoma 21 and Xiaoma 41.

The success of the MacBook Air range has spawned more copycats than we care to recall. To swiftly name a few, the Yepo 737S, Jumper EZBook 2 and to a lesser extent the Xiaomi Air 12 have all attempted to replicate and improve on Apple’s design, with mixed results.

And this particular offering is another device that uses the MacBook Air as a source of inspiration, going further than others by offering a champagne gold model as standard. Meet the Onda Xiaoma 31, a 13-inch ultrathin laptop (and no, it is not an Ultrabook).

Online Chinese retailer, Gearbest, sent us a review sample and sells the Xiaoma 31 for a not-so-insignificant £347 (around $445, AU$580). Note that while this price includes delivery, it is exclusive of any taxes that may be levied by HMRC or the courier companies on behalf of the vendor. Want to buy tech from online Chinese retailers? Read this first.

The polished, gold champagne metal finish of the laptop adds to the premium feel of the device, as does the silver rim running all the way round the base and the screen. It has a far less tapered design compared to its illustrious Apple rival, with a slightly smaller footprint at 14 x 315 x 207mm and a weight of only 1.4kg.

The top of the notebook is devoid of any design or logo – you can find the Onda branding on its underbelly alongside four rubber feet, a pair of speaker grills and a flap that hides an empty M2 slot for future storage expansion.

Open the laptop up and you’ll uncover a fairly big touchpad (100 x 66mm) with a fingerprint reader. As with most laptops, the touchpad doesn’t have any physical left/right mouse buttons. The keyboard is a fairly standard six-row model with the power button on the top-right.

Between the screen and the first row of keys are three status lights, two microphones and a single 10-inch black hinge.

The screen itself is a 13.3-inch Full HD model with fairly narrow bezels (at least compared to the MacBook Air). On the right side are the power port, one USB 3.0 connector and a mini-HDMI port. Opposite you’ll find another USB 3.0 port, a microSD card reader and an audio socket.

Oh and before we forget, the laptop comes with a brick power supply unit, reminiscent of the efforts that laptops were shipped with a decade ago. The 36W (12V, 3A) unit does the job but seems anachronistic compared to the svelte design of the Xiaoma 31.

There’s hardly anything to set apart the current generation of laptops and the 2016 crop. The only major difference here is the processor used; the Xiaoma 31 features an Intel Celeron N3450, from the Apollo Lake family.

That’s a 14nm part clocked at 1.1GHz with four cores and four threads, 2MB L2 cache, a 6W TDP and a burst frequency of up to 2.2GHz. Its processor graphics is a 12-EU (execution units) Intel HD Graphics 500 which has a base/burst frequency of 200MHz and 700MHz respectively.

The N3450 is roughly comparable to the Core M-5Y10 processor, a two-year old Broadwell part, with half the core count (but Hyper-Threading enabled), twice the cache and a slightly lower TDP. That chip made its way to the first-generation Lenovo Yoga 3 Pro.