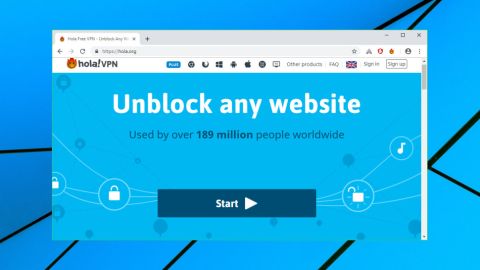 Hola is worth a try for site unblocking, but it doesn't have the features, power or privacy of a full-strength commercial VPN.

Hola is an interesting free VPN-like service which takes an unconventional approach to preserving your online privacy.

Unlike the competition, Hola doesn't rely on a fixed network of managed servers. The company describes itself as more of a "peer to peer" VPN, where browser traffic is routed through its users. Your traffic will pass through the computers of others who've installed the service, and some of their traffic might pass through PC.

This has some advantages. There are no fixed routes or destination servers, making it more difficult for sites to detect that you're using a VPN. It also keeps costs down, as there are no servers or bandwidth bills, allowing the basic service to be offered for free.

Disadvantages are that Hola only protects browser traffic, and even that isn't encrypted in the way you'll see with other VPNs. The service is great for unblocking websites, but not much use for anything else.

One potential issue is that you're allowing Hola to use some of your system and network resources. But the company says it only uses devices when they're idle, and connected to an electricity source. Even then, it claims "the amount of traffic that Hola passes through a peer on its network per day on average is less than a 20 second YouTube clip." That doesn't mean much without knowing the resolution, but if we take it as 720p, that could be 4-5MB.

That doesn't seem like much, but Hola does make real efforts to keep traffic down, including blocking P2P traffic (Hola doesn't support torrents under any circumstances.)

Maybe a more significant concern is that any Hola user could effectively become an exit server for someone else. If they're sending spam, hacking or doing anything else dubious, your IP address could become the one associated with that action.

You can avoid many of these problems by upgrading to Hola Premium, which doesn't share your bandwidth with other users, works on more platforms, and enables using a network of Hola's own servers. It's priced from $6.99 a month on the annual plan.

If you can live with its basic principles, though, Hola's core service is free for non-commercial use, and that's the product we're reviewing here.

Most VPNs route your traffic through their own servers, providing at least the possibility that they can log what you're doing. Hola's model of routing data through its users might seem a better way to protect your privacy, but it's not quite that simple.

"Hola VPN regularly monitors the consumer network for traces of misuse or security breaches. In addition, architecture modifications allow Hola VPN to see the origin of each request, thus if a cybercriminal were to use the Hola VPN network, the cybercriminal’s information may be passed on to the authorities. This makes Hola VPN un-attractive to abusers. Some VPN networks don't see both ends of the connection, and are therefore much more attractive for these uses."

The company says it monitors what users are doing on the network, to some degree, and that it can track back to identify the origin of any request it considers as 'misuse' or part of a 'security breach.' This is great for catching hackers, but it also requires more monitoring and logging than you'll see with standard VPNs.

Previous versions of Hola's privacy policy suggested that the company collects a substantial amount of "anonymous information" about service usage.

For instance, in the past Hola admitted to recording your “approximate geo-location, hardware specifications, browser type and version, the date of the Software installation, the date of your last use of the Services, your operating system type, version and language, registry entries, your URL requests, and respective time stamps.”

The latest version of the privacy policy no longer mentions any of that, but doesn't include any clauses to rule out such logging in the future either. It's possible that Hola doesn't log this kind of data any more, but it's also possible that the company is recording all the same information, but has just decided to stop admitting to it.

Put this all together and we think it's safe to assume that Hola can log much more information about you and your activities than most VPNs. The company can resolve this by having its systems publicly audited to confirm exactly what's going on, as providers such as TunnelBear and VyprVPN have done. But until then, if anonymity is your top priority and you're looking to reduce even the possibility of monitoring, Hola's privacy-related vagueness must be a concern.

Hola installs as a browser extension, instantly adding its logo to the Chrome address bar. There's no immediate need to adjust or configure the service, and the simplest option is to continue your browsing as normal.

If a site blocks you, clicking the Hola icon displays a list of source countries you can choose, often with the most appropriate at the top. Choose a region and Hola connects you to the site via users in that country, hopefully solving the problem.

The add-on will sometimes make smart suggestions if it thinks your current location might be a problem. For example, we chose a US location to access YouTube, but when we returned to BBC iPlayer, Hola displayed an alert recommending we switch back to the UK.

This won't work with all sites. In particular, Hola Free won't unblock Netflix (that's only available with the paid Hola Plus plan.) But it's generally very effective, allowing us to get into most geoblocked websites.

Hola also offers stand-alone versions for Windows, Android and iOS. Installing the Windows build got us a specially configured version of Chromium, with Hola pre-installed, and we could browse and unlock sites as usual. Installing a new browser just to run Hola seems like overkill to us, but it might be worth a try if you can't get the service working on your existing setup.

It's always difficult to get a useful measure of VPN performance, but Hola takes this to a whole new level. There's no fixed network of servers to assess, the route your traffic takes will change every time – and your hardware, browser type and setup could influence the results in unexpected ways. Hola works so differently that synthetic benchmarks may not give you meaningful information about the service, anyway.

For this review, we replaced our regular benchmarks with a more straightforward task: streaming 4K video from YouTube and other sites. Playback ran smoothly at all times, without any buffering, quality or other issues. Routing your traffic through other users' devices will bring some degree of performance penalty, but from what we can see, it doesn't make a noticeable difference to normal browsing or streaming sites.

Fast, free and user-friendly, Hola is an excellent tool for unblocking some streaming websites. But the free version doesn't work with Netflix, Hola and a few other sites, and it can't match the functionality or anonymity of a real VPN.