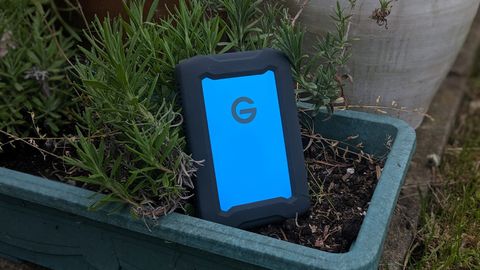 The ArmorATD from G-Technology is a distinctly average ruggedised external hard disk drive with a premium price tag that makes it hard to justify and even harder to recommend.

Rugged storage, as a market, has had something of a boom over the past two years, fuelled partly by remote workers looking to move away from desk but also by the colossal amount of data generated by content creators who prefer to work in the field rather than, well, tethered to a table.

G-Technology is part of Western Digital Corporation and a sister brand to Sandisk, Upthere and WD. It is focused primarily on high-end storage products that target the creative industry - think film makers, professional photographers etc.

ArmorATD is the new all-terrain rugged portable hard drive from G-Technology. It features a rubber sleeve and a solid aluminum enclosure and is available in 1TB, 2TB and 4TB versions with SRPs of $90, $120 and $170 respectively. We tested the 2TB model.

No surprise there, the drive is a slight variant of the G-Drive evRaW (which incidentally costs more despite featuring the same exact specs). The marketing literature mentions “triple-layer shock resistance which relates to the internal shock mounts, the aluminium enclosure and a protective rubber bumper.

The blue brush aluminum finish is classy with the big G logo being the only hint of the brand. A USB Type-C port is hidden behind a flap and there is an activity light to indicate whether the drive is working or not but it is hardly visible in daylight or bright working environments. Fortunately, since this is a spinning drive, it vibrates ever so slightly when in use.

We don’t know much about the internal hard drive itself other than it having a 5400RPM spinning speed, 8MB cache and, in all likelihood, two 1TB platters, which has been the maximum capacity available for the last three years. It carries the ID string ‘wd20smzm’ which would make it a variant of the WD Blue 2TB 2.5-inch Mobile Hard Drive. This is the same drive as used in the G-Drive mobile USB drive we tested recently.

The performance of the drive can best be described as being average. Our standard 10GB file was transferred in 85 seconds which equates to about 120MBps. ATTO benchmarks yielded read/write speeds of 165 and 140MBps respectively while CrystalDiskMark notched 100 and 129MBps respectively and AJA, 119 and 124. In the latter two cases, write speeds were superior to read speeds.

There’s no bundled software and definitely no freebies (like Seagate’s Adobe Creative Cloud subs). The drive is backed by a 3-year limited warranty and unlimited free technical support. However it doesn’t come with a rescue plan cover like some Seagate products do for free.

Likewise, it would have been reasonable to assume that G-Technology would have thrown in a free subscription to Upthere, WDC’s cloud storage solution for cross-marketing purposes. But it didn’t; a missed opportunity. The latter gives 20GB of data for free for life with a 100GB upgrade available for a mere $1.99 per month.

Evaluating the value-for-money ratio entails an analysis of what the competition is offering for each tier. The 1TB model is poor value, not only in light of what the competition offers but also because of how close it is to SSD prices. At the time of writing, a 960GB internal SSD (Adata Ultimate SU655) with three year warranty costs $80, adding an enclosure to it will probably bump the price to $100 making it a reasonable alternative both in terms of speed and durability.

Even if you don’t want to tinker with SSD, we feel that the Silicon Power 1TB external drive, which at $49, is almost half the price, is a better deal. It does carry a three year warranty and is water resistant. You could probably put the savings to good use by buying a cloud storage service from one of the providers listed in our best cloud backup buyers guide.

While we can’t recommend SSD for bigger capacities, the ArmorATD still suffers from comparison with lesser known brands (Adata, Silicon Power, Transcend, LaCIE) that provide equally capable hardware with similar warranty for much, much less. Silicon Power sells a 4TB external rugged hard drive for $108. That’s double the storage capacity of the 2TB ArmorATD for a 10% price discount. Granted that it doesn’t come with a Type-C connector but you can always get an adaptor if needed.