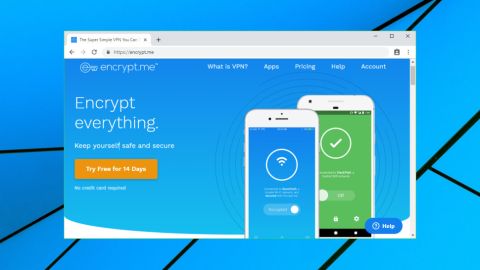 If you're happy with the basics then Encrypt.me offers good value for families, but don't expect any features, and beware the horrible Windows client.

Encrypt.me is a popular VPN provider owned by StackPath, the company behind IPVanish, StrongVPN and other VPN brands.

The website has minimal details on Encrypt.me's features, probably because it doesn't have many. There's no P2P or Onion support, no support for manually installing the service on routers and other devices, no secure DNS, malware blocking or anything even faintly surprising.

Instead, Encrypt.me's focus is on simplicity. It watches your activities, and can automatically connect to the fastest VPN location whenever you access an insecure network. The aim is to keep the user as far away as possible from any technical hassles.

Encrypt.me's network offers around 60 locations across more than 30 countries. Most are in North America and Europe, but there are also servers in Australia, Brazil, Hong Kong, India, Japan, Singapore and South Africa. Some companies give you much more choice - HideMyAss claims 280 locations in 190 countries - but Encrypt.me covers the basics, and its locations are spread more widely than you'll usually see elsewhere.

Prices are acceptable, although the real highlight here is Encrypt.me's flexibility. $4 gets you unlimited data for a week, for instance, while $10 covers you for a month, dropping to an effective $8.33 if you pay annually. Each plan supports connecting as many devices as you need for your own personal use.

Encrypt.me's real bargain is probably its Family Plan, which covers up to five family members for only $12.99 a month, paid annually. Every user gets unlimited data and can use an unlimited number of devices, cutting costs to as little as a monthly $2.50 each.

Best of all, if any of this sounds interesting, you can try out the full service for 14 days, no payment details required. When many providers no longer have any kind of trial, that's impressive.

Finding out what a VPN provider does with your data can be a struggle. We often plough through thousands of words of small print, FAQs, support pages and more, and we still don’t come up with any real answers. But Encrypt.me does things differently, with perhaps the clearest and most detailed privacy policy we've ever seen.

Headings are simple, with no complicated legalese. Individual sections are short, typically under 100 words, so they're not intimidating to read. And the content is precise and detailed, telling you exactly what you want to know.

Take logging, for example. The company explains that although it doesn't monitor where you're going online, a record is maintained of your last 16 days of session data: the incoming IP address, the virtual IP, the bytes sent and received, the time you're connected, and the source port of each outgoing connection, with start and end times. (The last one records the existence of a connection, but not where it's going.)

Why? The company says it allows them to respond to complaints. If someone's used Encrypt.me to send spam and hack a system, having session records enable them to find the offender, pass along the complaint to them, or maybe take some further action (not ‘call the police’, more like ‘terminate the account’) if the offense is serious.

This won't make a lot of difference to many people, and if you're only using the service to unblock Netflix or send emails, you might not care very much. But if you need a true zero-log VPN, Encrypt.me isn't it.

Signing up for Encrypt.me's trial was as easy as providing and verifying our email. A click took us to an account area on the website, where we could download apps for Windows, Mac, Android, iOS and Amazon Fire.

The Windows offering is horribly basic. Clicking on a system tray icon displays a simple popup with a Connect button, a plain text list of locations, a Settings button, and that's it. Click away from the popup and it disappears, which means you can't leave the window on your desktop to watch its status.

The client has all kinds of issues. We couldn't select a location by choosing it from the location list, for instance (no, really); we had to set a default in Settings.

There's little feedback on connection state. The client doesn't use desktop notifications to tell users when it connects or disconnects; your IP address isn't displayed anywhere; the system tray icon changes to show when you're connected, but there's no tooltip to tell you the current location.

The client doesn't seem to monitor your connection state, either. We forcibly closed our connection, and although the underlying Encrypt.me engine reconnected within seconds, the client didn't display a single alert to tell us what was happening.

There's no kill switch to protect you if the VPN fails, either. When we closed the Encrypt.me connection, our real IP address became visible to the outside world. It was hidden within a few seconds, but if the client hadn't been able to reconnect, perhaps because of a server failure, we would have been vulnerable for the rest of the session.

Fortunately, the Android app is much better. The interface is a far more conventional layout with a Connect button, a Location list organizing countries by continent, and a Favorites system for your most commonly used servers. You'll figure it out within seconds.

Once again, understanding whether you're connected, and what location you're using, is more difficult than it ought to be. If you leave the app to connect to the fastest available server, it won't tell you which one it chose. Choose a location and the client displays it, but only at the end of a paragraph of text. It would be much easier to use a graphic, like a flag, that you could recognize at a glance.

The app remains easy to use, though, and while it's very much aimed at novice users, there are a couple of welcome advanced options. You can have Encrypt.me automatically secure connections to untrusted networks, and split tunneling support enables choosing apps you don't want to go through the VPN.

Encrypt.me sells itself almost entirely on its privacy and security features, and barely mentions any ability to unblock websites. We wondered if that was because the service couldn't get us into anything, at all, but that turned out not to be true. We were able to unblock easy targets like US YouTube, more difficult platforms like BBC iPlayer, and Encrypt.me even got us into Netflix on some (but not all) of its servers.

We moved on to our speed tests, and found results were variable. UK and near European servers gave us an excellent 30 to 35Mbps, often with very little change in latency. UK-US download speeds were relatively poor at 10 to 20 Mbps, with some servers regularly failing to connect. But long-distance locations were better than we expected, including a consistent 10Mbps from the UK to Australia.

Whatever its other issues, our leak tests showed Encrypt.me's software does an excellent privacy-preserving job. There were no DNS or WebRTC leaks to compromise our identity, and our browsing was protected at all times.

Encrypt.me is easy-to-use and can work well for undemanding users. But its session logging, poor Windows client and all-round lack of features make it hard to fully recommend.