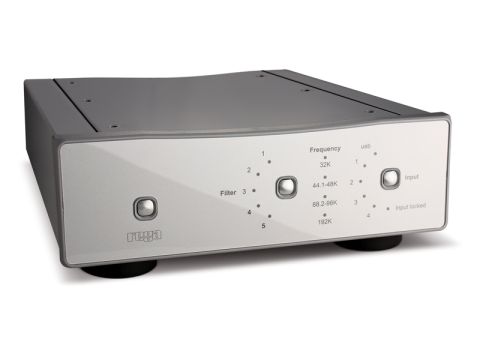 It's always hard to resist a sense of humour. When we opened up the Rega DAC the first thing we noticed was the large and clear text on the circuit board, saying, 'Best used with EL84 valves'.

Given that Rega has never made a single valve product in its several decades in business, this is clearly tongue-in-cheek. But then the whole idea of a Rega DAC was something of a surprise at first; the company having previously been in favour of keeping CD transport and DAC all together as one product.

Still, it's not just, or even principally, CD that's the intended source for the DAC. With digital audio increasingly coming from computer-type sources, often at higher resolution than CD's 16-bit/44kHz sampling, Rega sees this more as an adjunct to non-audiophile 'bit buckets' including computers, servers and so on.

Accordingly, it has a USB input alongside the usual electrical and optical S/PDIF and is fully compatible with high sample rates, up to and including 192kHz. At least it is via S/PDIF, as the USB input only handles sample rates up to 48kHz.

Front-panel buttons select between the five inputs and also the five filters. User-selectable filters are a popular option these days, not least because many DAC chips offer this internally. The Wolfson part chosen by Rega is such a device and the company has opted to make all its offerings available.

These are actually slightly different depending on sample frequency, but include as Option One the classic linear-phase filter typical of most CD players and also minimum-phase implementations. Filters Four and Five are non-aliasing types, which we would recommend as other filter slopes allow some aliasing distortion to occur.

We ended up using Filter Four for most of the listening. There's no 'upsampling' – except that there is, of course, because digital filtering in a DAC intrinsically involves upsampling and has done since the first Philips CD players in about 1983.

This is a well-made and efficiently assembled product. The back panel is neatly laid out and the insides contain few 'brand name' components. It locks almost instantly to an input and gave us no trouble at all in use.

Rega is one of those brands strongly associated in the general hi-fi consciousness with a certain 'house sound': pretty much the sound of the Planar turntables, which was always lively and rhythmic, if not necessarily always the most subtle.

Based on our experience with the company's audio electronics, we'd urge caution over making assumptions like that and this DAC certainly doesn't do anything to support them. Not that rhythm is slack, nor is life missing from the sound – quite the opposite, both are admirable.

It's just that they are very much in proportion with less 'Rega-ish' traits such as detail and finesse, silky-smooth upper midrange and treble and a generally delightful all-round confidence that we adored.

There's also a lack of hi-fi showoff tendencies; so no super-analytical detail or implausibly punchy bass. Instead, there's the kind of detail that's there when you want it, but not obtrusive when you don't.

Plus bass which may not always seem dramatic, but packs a serious punch when required. Treble extension is similarly effortless and unforced.

If there's a weakness in the DAC's performance, it's a minor one and concerns imaging. It seemed to us, using CD sources and also high-res ones (some of them made by us), that images are just a little further away than we're used to. That's preferable to having them too close, which can be quite unsettling, but deserves mention.

We soon got used to it, though and came to ignore it. That apart, it's hard to find anything to criticise. The technical performance is as assured as the subjective and for the very modest price, this seems to be very much the product to beat just now.