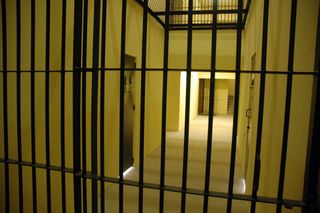 Dylan Osborn claimed he didn't know the &quot;friend request&quot; had been sent out by Facebook

Isn't it typical? With technological advances forever endeavouring to send the human race skyward, it's always human error that brings us right back down to earth.

It could happen to anyone...

A man who joined Facebook to look at a friend's wedding photos was jailed after the social networking site sent an automatic "friend request" to his estranged wife. Dylan Osborn had been told by magistrates to stay away from his wife, after inundating her with phone calls and text messages. He was sentenced to ten days in prison for breaking his bail conditions.

Meanwhile, a visitor to Australia's Ipswich Magistrates Court was lucky not to face charges himself when his raunchy mobile phone ring tone went off in the courtroom.

Apparently neither verbal warnings nor an awareness of the potential for an inappropriate disruption were enough to prompt the man to switch his mobile off. Lawyers and members of the public struggled to contain their laughter as the "voice of a woman experiencing heightened pleasure" rang for up to 20 seconds, Ananova reported.

And yet alongside all this we observed glimpses of true brilliance this week. Quantum Picture, for example, brought its advanced image recognition software to the home (perhaps not as we'd have imagined, but amusing nonetheless), while Ink Afterlife made huge strides in the quest for eternal life.

Yes, now you too can immortalise your loved ones. Simply send the ashes to InkAfterlife.com along with a photograph - they'll mix the ashes with printer ink and spit out a colour print for you. Beautiful.

Two American men are fighting over a three-year-old amputated leg that was stored in a barbecue smoker, according to The Register. One man says he purchased the leg when the smoker was auctioned off by a storage facility in North Carolina. The other claims (somewhat validly) that the leg was once attached to his body.

You couldn't make this stuff up.