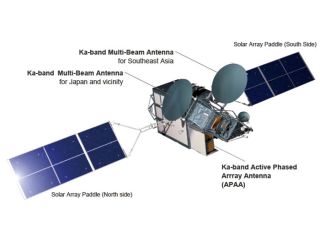 Internet connections at over 1Gbps should be coming to a lucky few Japanese surfers this summer if all goes well with the deployment of a new communications satellite that was launched on Saturday.

The 2.7 ton Kizuna satellite is currently sitting in geostationary orbit 36,000km above the Earth and about to start tests ahead of a likely July green light.

When it goes live, it will enable internet connections via satellite dish at two different speeds. Domestic customers with a 45cm-diameter dish will get 155Mbps downstream and 6Mbps for uploads.

As such, it's not terribly different from services already offered by Japanese ISPs. The main draw of the Kizuna connection will be in enabling internet connections in remote areas that currently have neither DSL nor fibre options.

Should interested parties be feeling flash, however, they'll be able to install a 5m-diameter dish for the full-fat feed of 1.2Gbps of bandwidth. There's no word on cost yet, but anyone able to afford the land in Japan needed for a receiver that size probably won't give two hoots.