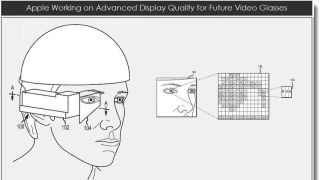 What's the helmet for?

"Anything you can do, I can do better" seems to be the mantra for the tech industry lately, though in reality that's always been the case.

Still, it's hard to see Apple's recent patent filing for a "heads-up display" comprising a single lens fitted over one eye as anything but a potential grab at Google's Project Glass.

Project Glass was unveiled in April, so Google will have a head start if the smart glasses market begins to heat up.

But Apple has an ace up its sleeve in the form of a patent filed in 2009 that could be used as ammo if the rivalry results in litigation.

Knowing Apple, it will

Given Apple's fondness for patent litigation, it seems inevitable that the tech giants will come to blows over the smart glasses technology.

Apple's 2009 patent involves "movie glasses" that would be used to view content streamed from an iPod or other media device.

But over time (and no doubt influenced by Google's Project Glass) the movie glasses have evolved into the current filing for a headset that places a retina-quality heads-up display over one eye.

However, the helmet is still a mystery.

Sources joke that Apple's answer to Project Glass could be called "iPatch" or "iEye," but the final form of the patented technology (if it ever actually gets made) will almost certainly be vastly different from what's pictured in the filing.

And Apple's application also notes that "other embodiments may take the form of other types of display devices such as television sets, computer monitors, projection systems, and so forth."

So maybe Apple will decide to go in a different direction entirely and the two California tech firms won't be forced into another turf war.

TechRadar has reached out to Google for comment, asking if they're prepared to defend Project Glass in court, but the company has yet to respond.