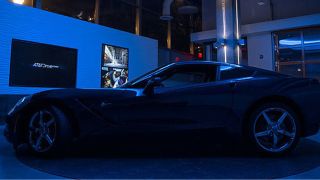 Is the car becoming the ultimate connected device?

What has the computing power of 20 personal computers, includes about 100 million lines of programming code, and processes up to 25 gigabytes of data an hour? The connected car is often sold as an enhanced experience for drivers, but vehicles able to optimise their own operation, maintenance, and get online, could develop into one of the next decade's major challenges for the tech industry.

What is a connected car?

Thus far it's been shorthand for 'automotive infotainment systems' – including internet radio and weather reports – that drivers can use, usually via a touchscreen dashboard interface. Connectivity is via cellular networks; each vehicle has a SIM installed.

"With our global platform we can put a single SIM into any vehicle wherever it's manufactured, and wherever it's going, to light it up on those local networks," says Chris Penrose, AT&T Senior Vice President of Internet of Things (IoT) Solutions. His inclusive Drive Studio innovation programme involves consumer electronics and app developers including LG, Samsung, Qualcomm, Ericsson, Jasper, Subaru, AccuWeather, Eventseeker, Stitcher, Dash, Gylmpse, iHeart Radio and Accenture.

AT&T Drive – found behind connected car interfaces in Audi, General Motors, Tesla and Volvo vehicles – is one of the OEM (original equipment manufacturer) platforms that car makers can customise to their own ends, and fill with their own apps, as they create their own connected vehicle clouds.

Another nice bonus (and sure to catch the imagination in the early days of the connected car) is the Wi-Fi hotspot that all connected cars create for passengers. However, whether the concept of the connected car catches on at all will depend on how eager drivers are to pay yet another monthly data fee.

Another Google versus Apple scenario?

This isn't the VHS versus Betamax battle it's often painted as being; no car maker would commit to building something as valuable as a car on a smartphone OS. Android Auto and Apple CarPlay – which all connected car OEM platforms can play nicely with – are focused only on integrating with mobile devices. It's likely that global, modular OEM platforms will flourish simply because they let car makers pick and choose the elements they want for their next car, and fully customise the front-end branding.

What are the major IT challenges for the connected car?

"There needs to be a continued focus on software development and competence in the auto market," says Brian Droessler, Vice President, Software & Connected Solutions Interior Division, Continental Corporation Business Unit Infotainment and Connectivity. "When an issue does happen the auto-maker needs to embrace update technology – consumers are ready to do it on their mobile device, and we need to bring it over from the consumer electronics industry."

It could drastically change the value of a car. "You're trying to bring together a lot of different technologies into a single environment, so the biggest challenge is enabling the car to stay as current with upgrades as the phones and tablets being brought into them," says Penrose. "We're doing a lot of work on OTA upgrades, and we want to get to a point where the car actually gets better as you drive it off the lot, and it keeps on getting better – it's challenging but a really big opportunity."

There are a bundle of other IT issues surrounding autonomous driving, and both car-to-car and car-to-infrastructure communications, all of which are next on the list for the connected car.

"There's a lot of IT integration work that's going to have to go into all the different standards of communication between wide area networks, between local networks, and how to amass all of this information," says Penrose. "Even in the event that the macro network is not there, things still have to work, particularly for autonomous self-driving cars."

There's also a security issue since the car is likely to become the major connected device for many. "Wireless locks, wireless cameras in homes – these are all vulnerable, and the same applies to vehicles," says Andreas Mai, Director Smart Connected Vehicle, Cisco. "We need end-to-end architecture that spans from the chip level of the CPU to the network of the vehicle to the gateway of the vehicle, and up to the cloud to protect against cybercrimes."