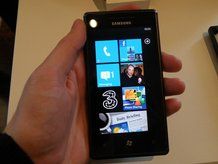 Microsoft is working on a proprietary Windows video calling application, much like Apple's FaceTime.

It has been suggested that the video calling app will integrate with Microsoft Live services in order to work with most recent Windows devices.

Beyond the hand of Skype

Comparisons to FaceTime hint at a closed loop video calling system, allowing users to call only those who also have the Windows app.

Video calling capability would benefit from a front-mounted camera, which none of the Windows Phone 7 handsets currently feature.

If the rumours are to be believed, we could see the front-mounted camera make its way into future versions of Windows Phone 7's (or maybe even Windows Phone 8's) minimum hardware specifications.

The Microsoft employee is quoted as saying that the FaceTime imitator will "reach beyond the hand of Skype".

Is this corporate hyperbole or can Microsoft truly create a Skype-slaying video calling app? Only time will tell.

Via Neowin and Redmond Pie