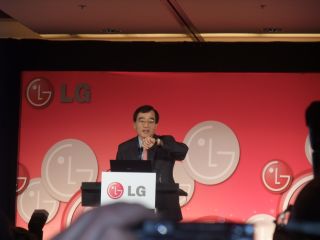 LG used CES 2009 to announce new GD910 mobile phone watch that both looks good and adds a decent bit of functionality to your wrist.

Announced at its CES keynote speech, the new watch will be able to communicate using 3G, can connect to a headset via Bluetooth and also features a built in speaker for easy conversation, although you will look a bit of a fool walking down the street chatting to your arm.

The wrist device has a 1.43-inch touchscreen, which allows users to type messages, make phone calls and also play MP3s, and comes in at a teeny 13.9mm thickness.

While this isn't the first of its kind by a long way given a number of lower-tier manufacturers have already created such devices, it is the first time a larger brand has given its blessing to a mobile phone in a watch.

However, we were a bit disappointed to see that the company didn't add movie playback into the unit, especially as this has been the staple feature for a number of other mobile phone watches.

But if you're still hankering from some video action, the possibility of video calling on your wrist is now a reality thanks to the 7.2mbps HSDPA connection.

And at least this product is going to make it to the market, with CTO Woo Paik announcing that the watch will be available from the second half of 2009, although the bad news for our US fans is that it's likely to only be available in Europe.