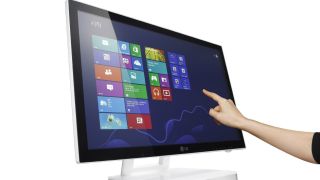 At CES this year, we were writing about "monster" 20-inch touchscreens. But by this Christmas, 23-inch and 27-inch touchscreens will be available on the high street, ready to fold down and use for painting or family board games.

Touch is undeniably going big, but it's still held back by the high prices of adding the touch layer to the screen. There is an answer, though - and tech companies are going for silver to find it.

ITO is the critical ingredient. It's a good conductor and it's transparent, but it's also expensive. It also requires both fragile materials and expensive multi-stage manufacturing processes, and although it can be recycled when supplies are limited, its mostly mined in China in conditions that are far from green.

The ITO powder is "sputtered" over the glass in multiple layers in a vapour deposition chamber, baked onto the glass and then etched into a sensor circuit. Sometimes the glass layer is chemically hardened first, but either way, the layers have to be carefully lined up to work.

But there is a cheaper and less environmentally harmful alternative, developed by MIT biochemist Dr Angela Belcher and inspired by the multi-layered formation of abalone shells. It uses silver nanowires scattered over a sheet of plastic.

Take two layers of plastic coated with very long, very thin silver strands (or even one sheet coated on both sides) and you have a capacitive touch sensor that's thinner, lighter, more flexible and much easier to manufacture than the ITO sensors.

You can't see through silver, but you don't need very much of it either. Silver is the same price as ITO, but it's a hundred times more conductive - it's even more conductive than gold (so remember that next time someone tries to upsell you on gold-coated connectors).

Because the nanowires connect in a mesh, you can get a full-screen sensor and still have 99% of the screen area clear. That lets through more light than an ITO sensor, so the LCD doesn't need to be as bright. And given that powering the screen takes 60% of the battery life in most devices, what you get is a thinner, cheaper screen and longer battery life.

The random structure of the nanowire also is harder to see than the regular patterns of other metal meshes, and you don't have to match it up to the pixel pattern of the LCD to avoid a distracting moiré effect. And because the sensor is thinner, you don't get as much parallax distortion - what you see on screen is closer to where the pixels are physically placed, so you can touch things more accurately.

Making silver nanowires starts with silver nitrate. Chemists (and alchemists) have been making this since the 13th century and silver has been used in photography since the 1800s. There are plenty of factories with the machinery to deposit silver onto large rolls of paper which can be re-used for depositing silver nanowires onto plastic sheets.

Sri Peruvemba of silver nanowire producer Cambrios told TechRadar that, after it's been made in a cleanroom, the silver nanowire solution (called ClearOhm) ships to the factory in a bucket.

It's then sprayed onto the touchscreen glass like ink. "Enough silver nanowire 'ink' to fill a water bottle is enough to make a couple of hundred thousand phone screens," say Peruvemba.