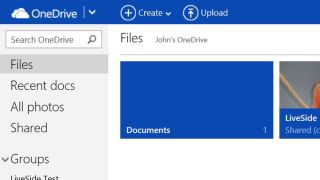 Microsoft aims to be number one in cloud storage

Images of Microsoft's revamped OneDrive cloud storage have been leaked online, giving us a first glimpse of its new features.

The screenshots were unveiled by Microsoft news site LiveSide, showcasing the as yet unlaunched OneDrive.com experience.

While on the surface the screenshots may appear to be little more than a rebranded SkyDrive, a requirement after Microsoft lost a lawsuit with BSkyB over the "Sky" trademark, the pictures reveal some new functionality.

The biggest change to OneDrive is the ability to have co-ownership of folders, a step up from simply sharing documents. Users can assign friends, family or colleagues as co-owners of a folder, which will give them the right to add, edit, or delete files, perfect for collaborative work.

The key difference between co-ownership and regular file sharing is that co-owned folders will act like personal folders to all users with the relevant rights. This lets users sync them to their PC, providing valuable offline access and backup.

LiveSide reports that there are more new features in the works for OneDrive, which are expected to be leaked in the coming days.

There's no word yet on a launch date for OneDrive.