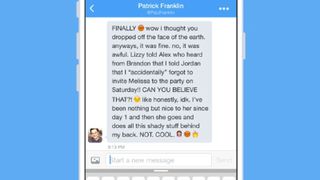 Twitter is all about brevity, and while that's great for pithy tweets, it can be cause for consternation with direct messages, when you may need more than 140 characters to chat with someone mano e mano.

Thankfully, Twitter is doing away with the character limit on direct messages. Now, you can go well beyond 140 characters to talk up someone privately.

Users won't notice any changes to Twitter's public side. The limit lift only affects DMs, which have undergone a number of restriction alterations in recent months.

Twitter on Android and iOS, twitter.com, TweetDeck and Twitter for Mac are being freed from the binds of 140-character direct messages starting today. The rollout will continue across the global Twittersphere in the coming weeks.

Note: If you send DMs via SMS, you'll still run into the character limit.