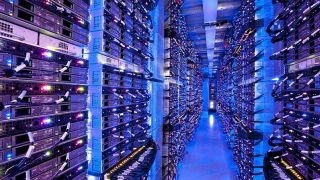 When Amazon first appeared, it rode the wave of e-commerce, tempting millions of consumers into buying goods online and having them delivered the next day. In those earlier days, there was no inkling that Amazon Web Services (AWS) would be a hit for the company.

The basis of AWS, according to Brad Stone's book 'The Everything Store', was to help internal Amazon teams to host apps, files, and so on. The actual idea for growing it beyond that was not thought of for some time and, at least initially, was viewed sceptically by senior management.

While Amazon blazed the trail in terms of online retail, back then, its tech credentials were – at least to the outside world – not on the same level as Google or other made-for-the-internet giants.

The decision to try and make a go of Amazon Web Services, though, turned out to be a masterstroke by CEO Jeff Bezos who, Stone writes, is responsible for most high-level decision-making within the company.

According to company filings and various analyst projections, AWS is a monsterthat is growing faster than even the company can comprehend.

"Amazon's introduction of Amazon Web Services in 2006 marked the launch of a notable shift in the market for outsourced enterprise computing," wrote Gartner, a leading research firm, in a report. "As a result, IT vendors of all kinds … have all felt significant impacts on their businesses, and many are now quickly adjusting their product strategies to deal with the new market landscape."

In the fourth quarter of 2015, AWS generated over $2.5 billion (around £1.9 billion, AU$3.4 billion) in revenue, of which over $650 million (around £500 million, AU$870 million) was profit. These figures are up over 50% from the previous year. Amazon is notoriously a company that is extremely tight on profits, seeking out every last dollar to spend on investment.

Ben Thompson, an independent analyst at Stratechery, argued in a note that: "AWS is simply spinning off more cash than Amazon knows what to do with." The company's new division, which has existed for 10 years, is just too profitable.

Indeed, Amazon's recent quarter-to-quarter results have been unusually profitable for the company. The firm announced in its Q1 2016 report, which covers the three months leading up to April, that its net income was $513 million (around £395 million, AU$685 million), up from a loss of $57 million (around £44 million, AU$76 million) in the previous year.

It's clear from this that AWS is a monster business that could, in the future, overtake its retail counterpart.

It's hard to see from this perspective that Amazon would need to do anything differently, especially as the addressable market for cloud services is virtually infinite as more and more companies of all sizes move online.