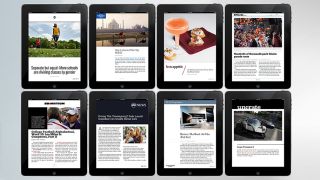 Time to take a trip down the internet rabbit hole

The internet is big. Really big. It's so big that reading it all would take an estimated 57,000 years - and that's just for the stuff that's already online, not the stuff that would be uploaded while you tried to catch up. Not all of that - or perhaps even much of that - content is any good, but there are still stacks of great stuff to find.

Unfortunately the bigger the internet gets the harder it is to find the good stuff.

That's where discovery engines come in. Discovery engines are sites, services and apps that aim to help you find the best, funniest, most useful and most interesting things online, and while they often have very similar missions they go about them in very different ways. Here are some of our favourites.

You know all of those memes that pop up on Twitter and Facebook? Yeah, they are from Reddit. So a lot of clickbait articles. Actually, pretty much anything that is funny, inspiring, thought-provoking or, well, animal based will have made its way to Reddit before anywhere else on the internet.There's a good reason the message board calls itself the front page of the internet and it's a perfect blend of everything the web stands for. And cats. Lots of cats.

StumbleUpon has been around since 2001 and hasn't changed that much since its launch. It uses collaborative filtering - a combination of algorithms and humans pressing thumbs-up and thumbs-down buttons - to identify content you might like.You can filter out adult content or Flash clips, block domains, find fellow users via your Facebook, Twitter, LinkedIn or Google+ accounts and create sharable lists of things you've liked. The results feel fairly random, but that's part of the charm.

Sometimes the most interesting things have already been discovered by the people you know or follow on social networks. Wouldn't it be great if you could find those links and view them glossy magazine style? That's what Flipboard does; it presents information from your social media accounts, RSS feeds and its own huge selection of topics to create a personalised electronic magazine.

Now owned by LinkedIn, Pulse does a similar job to Flipboard but with the emphasis on media outlets' RSS feeds, LinkedIn Influencers and what's trending on the LinkedIn network. The good news is that that means fewer cat GIFs (unless you're connected to leading lights in the cat-GIF industry, of course); the bad news is that the results can be a little repetitive.

Xyo is designed to solve an all too common problem: finding decent, interesting or useful apps can be a pain. It solves that by recommending things you might like and by providing clear information based on user reviews. It's very fast and offers incredible depth: apps for doctors, anyone?

You already know about Buzzfeed, but you might not have encountered its more cerebral Buzzreads: it's where the site publishes long features rather than the traditional headline-and-GIF posts it's more famous for. It's one of several sources for Longreads' excellent selection of interesting online journalism, and there are plenty of similar services too including Longform, Instapaper's The Feature, Arts & Letters Daily and Twitter's If You Only.

Medium is the latest project of Ev Williams, whose previous adventures included creating Blogger and Twitter. It's a publishing platform, and its home page is a great place to find interesting articles once you've signed up (it's free) and logged in. The 'reading list' gives you a selection of what Medium's editors think deserves your attention, and the Top 100 shows the previous month's most popular stories.