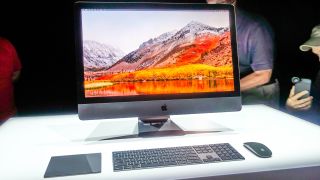 There’s been an interesting development on the iMac Pro front with Intel’s revelation of its full line-up of Xeon server-grade processors from the Purley platform.

These new CPUs are rumored to drive the powerful all-in-one, but there doesn’t appear to be a top-end CPU in the range which matches the specifications Apple previously stated.

Apple said that the iMac Pro would use eight, 10 and 18-core processors with a maximum Turbo speed of up to 4.5GHz, but as Mac Rumors observes, the fastest CPUs in the revealed Purley chips only run up to a Turbo clock of 4.2GHz.

Specifically, the quickest chip that matches Apple’s mentioned core counts is the Intel Xeon Gold 6144 which is an eight-core CPU with a base clock of 3.5GHz and Turbo to 4.2GHz.

So that leaves room for a bit of head scratching here: these Purley processors may be fine for most of the machines in the range, but when it comes to the top-end iMac Pro, what processor is Apple planning to use exactly, given that there is no 4.5GHz model in existence?

Mac Rumors offers up a simple explanation: Intel hasn’t announced all its Purley models yet, and there’s a beefier one in the pipeline which is destined for the higher-end iMac Pro. We’re inclined to agree with this suggestion.

The other explanation could be that this is a simple miscommunication between Intel and Apple, or just a plain error by Tim Cook’s firm when it came to revealing these details. Although you would hope that wasn’t likely, it’s not beyond the realms of possibility.

Pieces of the Purley puzzle

It doesn’t seem likely that the rumors about Purley are incorrect, given everything else matches up and fits together too neatly – including the iMac Pro’s exorbitant cost, plus its launch date of December (this is likely to be the reason Apple is waiting until the end of the year, rather than bringing the all-in-ones out earlier).

Ultimately, we have to bear in mind that this is still only a rumor.

The Purley speculation emerged a few weeks back, after Pike’s Universum did some digging around in the firmware files for the iMac Pro in the latest beta of macOS.

According to this rumor, Apple’s all-in-one will also have an ARM coprocessor alongside the Purley Xeon CPU, which will be in place to help tighten security on the machine, adding support for a feature known as Apple SecureBoot. A Touch ID fingerprint reader may also be incorporated.

All we truly know at this point, however, is the aforementioned core counts Apple has announced, and a few other confirmed pieces of info about the hardware: the iMac Pro will have AMD Radeon Vega graphics, up to 128GB ECC memory and 4TB SSD storage. This helps the machine tol offer 11 teraflops of single precision compute performance.