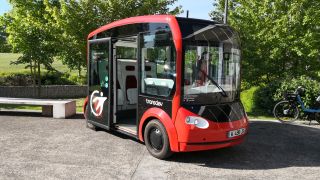 It’s a weird vision: I’m speeding down the street, sitting backwards in the front passenger seat of an electric Renault Zoe Cab and nobody's driving the car. However, this isn't some weird early hours cheese-induced dream, but reality. It’s my welcome to the world of the French robo-taxi during a deep dive into future transportation options on show at the Paris-Saclay Autonomous Lab project.

The aim of the initiative has been to come up with a selection of possible options that will allow people to use a variety of different autonomous travel systems in the Paris-Saclay area. And, while it could work well enough here, it’s also easy to see why the idea could easily be rolled out to other metropolitan areas, not just in France, but around the world.

The team involved in the Paris-Saclay Autonomous Lab venture is compromised of experts from Renault Group, transport and infrastructure provider Transdev along with IRT System X who have helped with their model-based systems engineering, VEDECOM Institute for Energy Transition and the University of Paris-Saclay itself. The latter is the location where the testing has been taking place.

It’s an ideal place as there’s a healthy collection of assorted traffic types, cyclists and students distracted by their smartphones. Lots for autonomous vehicle scientists to crunch data over in other words.

The vision does seem like a good one. The group collaboration has essentially been working on a way of joining up those annoyingly inconsistent dots of everyday travel. Here, reckon the experts, is a potentially cohesive plan for getting you from A to B using a combination of train, autonomous bus, a robo-taxi and a prototype-for-now mini vehicle called the EZ-Pod.

The latter was a curious little two-seat machine that resembled something a small child would draw as a representation of a car. It was lime green and looked quite cool, but was more for show than anything else.

So while it was still early days for the EZ-Pod, the other vehicles on show were the real deal albeit still at the development stage. Currently, in the case of the i-Cristal autonomous shuttle bus, the idea has so far only been trialled using staff involved with the programme and invited volunteers. And it's only available at night, presumably because there are less people about, which makes testing that little bit easier.

The objective of the exercise on the day TechRadar visited the campus was to illustrate how someone would start their journey by train and then arrive at a key destination, in this test case at the Massy regional station.

From there they would walk outside and board the autonomous Transdev-Lohr i-Cristal. This is a funky little machine that looks like a regular bus that has shrunk in the wash. There’s no driver and no supervisor, as the bus is comprehensively monitored by a control center located outside the train station. Between 12.30am and 3:00am, the autonomous bus, which can hold up to 16 passengers, serves four stops; Massy Palaiseau, Palaiseau Ville, La Vallée, Camille Claudel.

Admittedly, this is only a distance of just under 6km, but it’s far enough to be useful, particularly late at night. And while the bus does exist, and we saw it for ourselves, we didn't get to ride on it, which was disappointing. More importantly, perhaps, for anyone wary of public transport, including solo female travellers, the whole scenario immediately rang alarm bells.

What, we wondered, would a passenger do if they were in the bus on their own at night and a stranger got on at a stop? After all, the vehicle is unmanned and only has a control center operative keeping an eye on things from a remote location.

These concerns were highlighted while we were at the bus stop looking at the stationary i-Crystal. A slightly dubious individual of the kind who tend to frequent bus stations wanted to get on the bus, even though it wasn’t going anywhere. A spokeswoman from Transdev, while obviously enthusiastic about the idea, agreed that there could be some who would be slightly nervous about boarding a bus without a driver.

We weren't reassured when it was explained that the autonomous fun-sized bus couldn't be stopped randomly. While it does have an emergency button, it is also programmed not to stop at, say, a traffic intersection. Sensible in one respect, but therein lay the problem. A random attacker won't wait, so a passenger needs to be able to react in an instant. On paper, the plan sounded like a good one, but add people into the equation and currently this part of the A-to-B transport puzzle seemed flawed.

Ride sharing, but with whom?

Faring rather better during the next demonstration was an autonomous daytime on-demand car service, which made use of several Renault Zoe Cab prototype vehicles. The thinking is that people on campus can use the compact cars to get around, either by hailing one of the little blue saloons or by booking a ride using an app called Marcel. Again though, this is another ride-sharing initiative, so there is every chance that the car might stop en route to pick up another traveller.

However, we did at least get to try this service. Annoyingly, the law, plus nervous people in suits from the companies involved, insist there is a real person in the driving seat at all times. So we got into the Renault Zoe cab with a man sitting behind the wheel and also a tech expert involved with the project perched in the back.

Being a prototype, the vehicle was festooned with all sorts of tech, but the interior had been reworked to illustrate the possibilities of sitting in a car without the need to face forwards.

Which is where we started this piece – backwards. With us in the front seat, but looking out of the back window, the car took us on a circuit of the campus. The man in the driving seat just sat there, while the car did its own thing and was impressively responsive. Steering, gears, turn indicators: it did the lot unaided.

There were lots of potential hazards too. We witnessed people cycling along very randomly, unsuspecting joggers and distracted pedestrians, which meant the system had to be on the ball. It actually seemed very impressive.

So the technology is in place and the plan seems like a good one. The only potential issue is down to the people who might use it. Most individuals are fine, but the biggest challenge for an idea like this is if travellers will be happy to share their journey with strangers in a car or bus that doesn’t have anyone at the wheel.