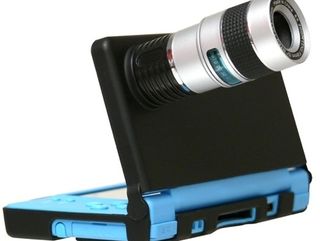 Peripheral maker Nyko is releasing a this HUGE add-on lens to bump up the DSi's 0.3 megapixel camera.

TechRadar supposes you could throw this hilarious device in your manbag for those odd occasions when you really need to take close-up and grainy pictures of flowers with your games console.

Nyko's latest will only set you back a mere $25. It is sure to make you the envy of all your DSi-toting mates.

Or maybe not. Whatever, it's so bizarre, we still want one...