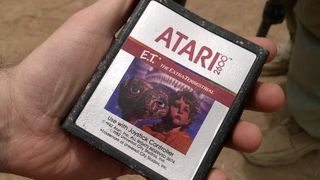 Here layeth the worst video game of all time

The well-publicised search for the E.T. cartridges discarded by Atari 31-years ago after the game's infamous flop has yielded success!

Thousands of copies of the game, widely considered the worst of all time, have been dug up in a New Mexico landfill site, during filming for a documentary on the search.

"For anybody who doubted," said director Zak Penn, "there's a whole heck of a lot of games down there. We just saw them."

E.T. was developed in just 6 weeks in 1983 as Atari attempted to capitalise on the success of the Spielberg film. Millions of copies were left unsold and left Atari in a half-billion dollar hole. To hide its shame, as folks tend to do, Atari buried the problem.

Now the cartridges have been found, it seems reasonable to ask what the filmmakers intend to do with them. Find a space ship and send them home? Where's that BMX and speak and spell?

Don't worry, our blips will always "be right here"