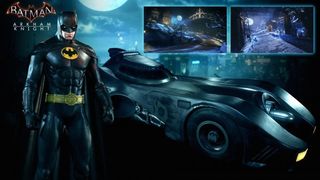 While Batman: Arkham Knight has been struggling on the PC side of things, come August, the game will be channeling the 80's with a new DLC.

The DLC will include a 1989 skin pack, which takes on the design elements of the 25-year-old Batman movie, which was directed by Tim Burton and starred Michael Keaton.

Along with a Batman skin from the 1989 film, the DLC will also include the Batmobile from the film and two music tracks inspired by the film's sequels.

The DLC also has five other skins, including 1990s Catwoman, One Year Later Robin, Arkham Origins Batman, Iconic Grey & Black Batman and 1970s Batman skins, as well as the the Original Arkham Nightwing.