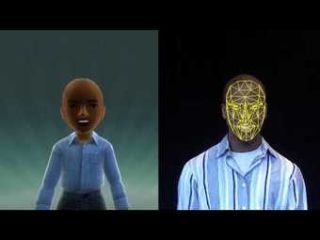 A new demo of the forthcoming new 'Avatar Kinect' service for Microsoft Kinect shows off the latest developments in facial mapping tech.

The Kinect facial mesh will be able to map the user's face in order to create a fully expressive, realistic speaking animation in the game.

The video below gives a good idea of how we might well be chatting with our mates on Xbox Live and interacting with our games later this year, courtesy of our recently-acquired new Kinect cams.

The demo shows Kinect's generated 3D mesh tracking a user's movements and then applying them to his own Xbox Avatar in real time.

Avatar Kinect was a major announcement for Microsoft at CES 2011.

Microsoft boss Steve Ballmer showed a short highlight reel at last week's event which gave a teaser of what was in store later in the year for Xbox 360 Kinect users with Xbox Live Gold accounts.

Ballmer said Avatar Kinect will be free for all Xbox Live Gold members when it arrives later this spring.