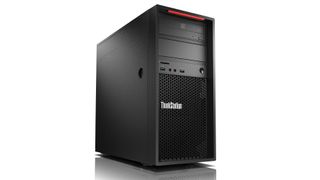 Lenovo has revealed a pair of workstations, one of which is a fresh offering – the ThinkStation P410 – alongside a refreshed ThinkStation P510.

The P410 can be configured with up to 128GB of DDR4 system RAM, and offers plenty of flexibility in terms of storage options, allowing for up to four drives, whether that's traditional spinning disks (to a maximum of 32TB) or M.2 PCIe NVMe SSDs (up to 3TB maximum).

You also get the Lenovo Performance Tuner optimisation tool which allows for tricks like resource monitoring and setting up profiles for specific pieces of software.

The revamped ThinkStation P510 (pictured above) is aimed at those chasing the maximum possible performance in a single-socket workstation, and again at the heart of the machine Lenovo is offering Intel Xeon E5-1600 v4 CPUs (or E5-2600 v4 – up to 22-cores in this case).

You can combine that with up to an Nvidia Quadro M6000 graphics card, and up to 256GB of DDR4 system memory.

In terms of storage, this workstation can be specified with up to 11 drives, and the case benefits from a modular design for easy upgrades and boasts 'flex trays' which can hold two drives per bay. A further neat design touch is tri-channel cooling which helps the machine to stay cool even under the heavy workloads this beast is likely to have thrown at it.