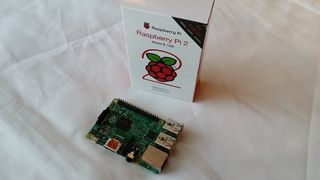 Thanks to a faster, quad-core ARM CPU and double the RAM of the previous model, Upton is confident that the new $35 (£22.85/AU$45) board is more capable of handling more demanding Commodore Amiga games than its 2014 predecessor, the Model A+.

He told TechRadar: "I really want to see Amiga emulation on this thing - they were beautiful machines. The original Pi is almost good enough to run some Amiga 500 games if you turn the hardware fidelity down, but you can't get the later ones that rely heavily on the exact cycle timings.

But despite The Raspberry Pi 2's extra layer of muscle, Upton has mixed feelings about using the opportunity to update older classics with improved graphics.

He said: "I was a real Team 17 fan. I bought Alien Breed for PS3, which unfortunately has the original graphics. You can't believe how low-resolution the whole thing is.

"On the other hand, the Superfrog HD remix is brilliant, but it only has the enhanced graphics which kind of sucks."