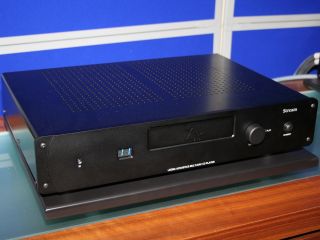 Leema's Stream CD player: one for the Christmas wish list

Earlier in the year, the ex-BBC team behind Leema Acoustics launched a groundbreaking multi-DAC CD player called the Antilla to excited audiophiles up and down the country.

The £2,500 Antilla was the Welshpool-based company's first-ever CD player and its USP was its 20 internal digital to analogue convertors (DACs). But now Leema's proprietary multi-DAC technology, known as 'MD2 Active Differential Multi-DAC' can be found in a much cheaper machine.

Leema Acoustics' new £995 Stream CD player is closely based on the Antilla and is set for launch in time for Christmas. It will use a variation on Leema's Multi-DAC technology, employing 16 convertors as opposed to the Antilla's 20.

Leema is also pioneering a new type of front-panel control system, that's described as similar to operating BMW's iDrive controller. The fascia-mounted control will allow users access to all the usual machine functions from a single point.

The company is also expected to launch a matching stereo integrated amp called the Pulse, also priced at £995. This will offer 85 watts per channel, a MM/MC phono stage and a fascia-mounted 3.5mm mini-jack input for iPods and the like.