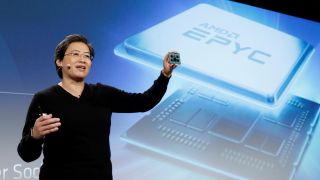 During its Next Horizon event in San Francisco, AMD announced a number of new products geared towards boosting data centre performance as well as its new partnership with AWS that will allow businesses to leverage its EPYC processors via the cloud.

Amazon Web Services (AWS) was also in attendance and the cloud platform company joined AMD on stage to announce the availability of three of its popular instance families on the Amazon Elastic Compute Cloud (EC2) powered by the chipmaker's EPYC processors.

For the first time, AMD provided details on its upcoming Zen 2 high-performance x86 CPU processor core that is the result of a new revolutionary modular design methodology. This modular system design uses an enhanced version of the company's Infinity Fabric interconnect to link separate pieces of silicon, called chiplets, within a single processor package.

The end result of using a modular system design is much higher performance, lower power consumption and other improvements that can help reduce data centre operation costs and cooling requirements.

AMD's Radeon Instinct M160 and M150 are the first 7nm GPUs and both products are scheduled to ship to consumers this quarter. These new graphics cards are based on the Vega architecture but are specifically designed to be used for machine learning and artificial intelligence.

“The multi-year investments we have made in our datacenter hardware and software roadmaps are driving growing adoption of our CPUs and GPUs across cloud, enterprise and HPC customers. We are well positioned to accelerate our momentum as we introduce the industry’s broadest, most powerful portfolio of datacenter CPUs and GPUs featuring industry-leading 7nm process technology over the coming quarters.”